Posted on Thursday, July 29 2010 @ 22:29 CEST by Thomas De Maesschalck
Amazon introduced its new Kindle lineup. The next-gen model is 21 percent smaller, it weighs 15 percent less, offers double the storage, promises 50 percent better contrast, 20 percent faster page turns, and up to one month of battery life. The device features a 6" E Ink screen and will be available in two colors; graphite and white.

One of the new things is that Amazon now offers a WiFi-only version for $139, making it the cheapest Kindle ever, while the regular model with WiFi + 3G will ship for $189. Amazon started taking preorders, but it will still take until August 27th before the firm starts to ship the new Kindle.

Millions of people are already reading on Kindles and Kindle is the #1 bestselling item on Amazon.com for two years running. It's also the most-wished-for, most-gifted, and has the most 5-star reviews of any product on Amazon.com. Today, Amazon.com is excited to introduce a new generation of Kindle. The all-new Kindle has a new electronic-ink screen with 50 percent better contrast than any other e-reader, a new sleek design with a 21 percent smaller body while still keeping the same 6-inch-size reading area, and a 15 percent lighter weight at just 8.7 ounces. The new Kindle also offers 20 percent faster page turns, up to one month of battery life, double the storage to 3,500 books, built-in Wi-Fi, a graphite color option and more-all for only $189, and still with free 3G wireless-no monthly bills or annual contracts.

Also today, Amazon introduced a new addition to its family of portable reading devices-Kindle Wi-Fi. Readers who don't need the convenience of free 3G wireless can now enjoy the new generation Kindle for the lower price of only $139. The all-new Kindle and Kindle Wi-Fi are now available for pre-order at www.amazon.com/kindle3G and www.amazon.com/kindleWi-Fi, and will ship to customers in over 140 countries and 30 territories beginning August 27.

Kindle offers the largest selection of the most popular books people want to read. The U.S. Kindle Store now has more than 630,000 books, including New Releases and 109 of 111 New York Times Best Sellers. Over 510,000 of these books are $9.99 or less, including 80 New York Times Best Sellers. Over 1.8 million free, out-of-copyright, pre-1923 books are also available to read on Kindle. Kindle lets you buy your books once and read them everywhere-on Kindle, Kindle DX, iPad, iPod touch, iPhone, Mac, PC, BlackBerry, and Android-based devices. Amazon's Whispersync technology syncs your place across devices, so you can pick up where you left off. With Kindle Worry-Free Archive, books you purchase from the Kindle Store are automatically backed up online in your Kindle library on Amazon where they can be re-downloaded wirelessly for free, anytime.

More than 235,000 books have been added to the Kindle Store in just the last six months, including New York Times Best Sellers "The Girl Who Kicked the Hornet's Nest," "The Immortal Life of Henrietta Lacks" and "The Passage." The Kindle Store also recently added 20 contemporary classics from the Wylie Agency's new "Odyssey Editions" imprint that are available for the first time as e-books and exclusively in the Kindle Store, including John Updike's Pulitzer Prize-winning Rabbit series, Vladimir Nabokov's "Lolita," Norman Mailer's "The Naked and the Dead," Philip Roth's "Portnoy's Complaint" and Ralph Ellison's "Invisible Man."

"Kindle is the best-selling product on Amazon for two years running. We lowered the price to $189 and sales growth tripled. Now, we are excited to introduce a new generation Kindle that is smaller, lighter, and faster, with 50 percent better contrast. Readers are going to do a double take when they see Kindle's bright new screen and feel how remarkably light the smaller 8.7 ounce design feels in one hand," said Jeff Bezos, Amazon.com Founder & CEO. "If you don't need the convenience of 3G wireless, we have an incredible new price point-$139 for Kindle Wi-Fi. Kindle Wi-Fi has all the same features, same bookstore, same high-contrast electronic paper display, and it's even a tiny bit lighter at 8.5 ounces. At this price point, many people are going to buy multiple units for the home and family."

All New, High-Contrast E-Ink Screen, Read in Bright Sunlight: The new Kindle uses Amazon's all-new electronic ink display with 50 percent better contrast for the clearest text and sharpest images. No other e-reader has this screen or this level of contrast. Unlike LCD screens, Kindle's paper-like display looks and reads like real paper, with no glare, even in bright sunlight.

New Sleek Design, Lighter Than a Paperback: The new Kindle has a 21 percent smaller body while still keeping the same 6-inch-size reading area. At only 8.7 ounces, the new Kindle is 15 percent lighter and still 1/3 of an inch thin, making it lighter than a paperback and thinner than a magazine. With Kindle you can read comfortably and naturally with just one hand for hours. The new Kindle Wi-Fi is even lighter at just 8.5 ounces. 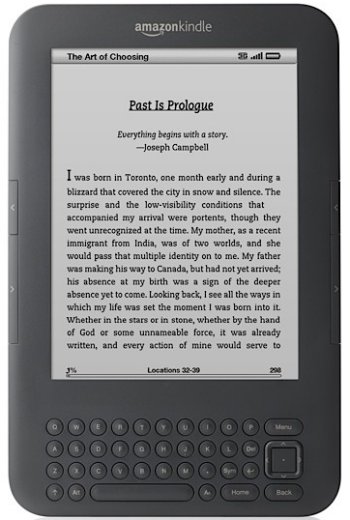