Posted on Wednesday, Sep 05 2012 @ 22:36 CEST by Thomas De Maesschalck
Nokia showed off the Lumia 920, its upcoming Windows Phone 8 flagship phone. This device features a 4.5" PureMotion HD+ IPS LCD screen with 1280 x 768 pixel resolution that promises to be 25 percent brighter than "the next best panel" thanks to Nokia ClearBlack with high brightness mode and Sunlight Readability Enhancements. It comes with the dual-core 1.5GHz Qualcomm Snapdragon S4 processor, 32GB internal storage, a 2000mAh battery, NFC, and a 8.7MP Nokia PureView digicam with 1080p video recording.

The phone will be available in black, grey, white, red and yellow, it has a polycarbonate body with removable shells so you can swap colors and there will also be covers that support wireless charging (Qi standards based) in combination with a wireless charging pad. Interestingly, Nokia says the touch technology in this phone will also work with gloved hands thanks to Super Sensitive Touch from Synaptics. 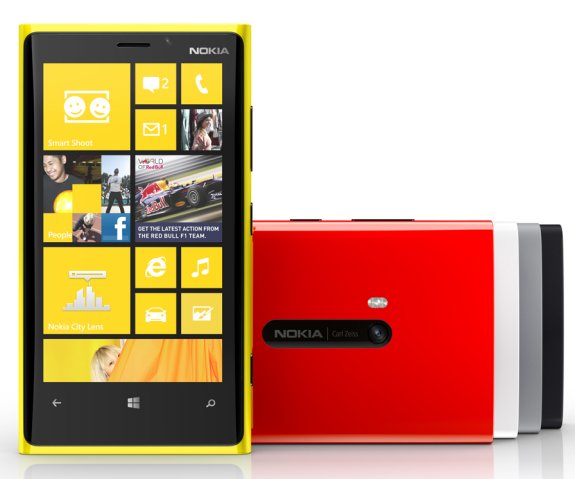 The Nokia Lumia 920 is the flagship Windows Phone 8 smartphone, including the latest advances in Nokia PureView imaging innovation. Using advanced floating lens technology, the camera in the Nokia Lumia 920 is able to take in five times more light than competing smartphones without using flash, making it possible to capture clear, bright pictures and video indoors and at night. It also compensates for hand movement while the photo is being taken.

"Nokia PureView continues to deliver cutting-edge technology to make it possible for a smartphone camera to take the kind of images usually only seen on a standalone SLR camera," said Jo Harlow, executive vice president of Nokia Smart Devices. "With the Nokia Lumia 920 we have made it possible to shoot pictures and video at home, outdoors, in a restaurant or even at night, and come out with professional-looking results."

"We view imaging as a core area for differentiation in the smartphone space," said Crawford Del Prete, Executive VP WW Products and Chief Research Officer, IDC. "Low light photography has been a weak point for smartphones. Nokia has addressed this with PureView to create real customer value. By applying its rich expertise in imaging Nokia has created a best of breed experience for everyday use."

The Nokia Lumia 920 also comes with Nokia City Lens, the latest addition to the Nokia location suite. By pointing the camera at a city street, City Lens overlays information about restaurants, shops, hotels and more on the surfaces of buildings, for the most intuitive way to explore surroundings. Nokia City Lens is the start of a new augmented reality experience that also enhances Nokia Maps, making it possible to move between maps view and augmented reality view to help people check their direction and surroundings. Along with enhancements to Nokia Drive and Nokia Transport, the Nokia location suite of services represents the most comprehensive, integrated mapping experience of any smartphone.

The Nokia Lumia 920 also comes with Nokia's largest ever battery (2000mAh) and, for the first time, built-in wireless charging for an easy, convenient way to get more out of every day.

Also revealed today is the Nokia Lumia 820, this model features a 4.3" OLED screen with 800 x 480 pixel resolution and the same high brightness, sunlight readability and sensitive touch technologyes. It also has a 1.5GHz dual-core Snapdragon S4, but only a 1650mAh battery (including Qi wireless charging support) and a 8MP digicam with 1080p video recording. Internal storage is just 8GB but this model comes with a microSD memory card slot. The Nokia Lumia 820 will be available in red, yellow, grey, cyan, purple, white and black.

The Nokia Lumia 820 is a stylish, mid-range smartphone that delivers high-end performance in a compact package.

While the Nokia Lumia 820 has the same unibody look and feel as the high end Lumia smartphones, it comes with an exchangeable shell design. Exchangeable shells not only make it possible to select from a range of colors, but also to add wireless charging. Beneath the shell is room to insert a micro SD memory card. 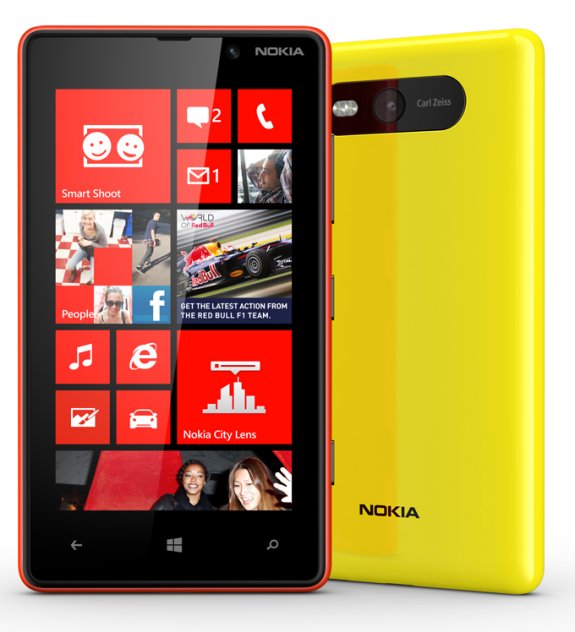 Both phones will be available in pentaband LTE and HSPA+ variants and are expected to start shipping in select markets later in the year. Pricing and availability remains a mystery.