Posted on Monday, Nov 12 2012 @ 18:50 CET by Thomas De Maesschalck
Earlier today AMD revealed its FirePro S10000 and now NVIDIA introduces its Tesla K20 family at SC12. These new supercomputing accelerator cards are based on the GK110 GPU, which features a whopping 7.1 billion transistors. The Tesla K20 features 2496 CUDA cores, 706MHz core,and 5GB GDDR5 memory at 5.2GHz with a maximum memory bandwidth of 208GB/s (with ECC disabled, ECC enabled consumes 2-15%). This card is designed for servers and workstations, it comes with an active cooling solution, it offers 3.52 teraflops of single-precision and 1.17 teraflops of double-precision computing power.

The Tesla K20X on the other hand is aimed solely at servers, it relies on its surroundings to generate airflow for cooling. The K20X has 2688 CUDA core, 732MHz core clockspeed, 6GB GDDR5 clocked at 5.2GHz, 250GB/s memory bandwidth, 3.95 teraflops single-precision and 1.31 teraflops double-precision computing power.

The Tesla K20 has a 225W TDP and the Tesla K20X comes in at 235W. Pricing information isn't available but earlier reports claimed that the Tesla K20 will cost around $3,199.

NVIDIA today unveiled the NVIDIA® Tesla® K20 family of GPU accelerators, the highest performance, most efficient accelerators ever built, and the technology powering Titan, the world's fastest supercomputer according to the TOP500 list released this morning at the SC12 supercomputing conference.

Providing the highest computing performance ever available in a single processor, the K20X provides tenfold application acceleration when paired with leading CPUs.(2) It surpasses all other processors on two common measures of computational performance -- 3.95 teraflops single-precision and 1.31 teraflops double-precision peak floating point performance.

The new family also includes the Tesla K20 accelerator, which provides 3.52 teraflops of single-precision and 1.17 teraflops of double-precision peak performance. Tesla K20X and K20 GPU accelerators representing more than 30 petaflops of performance have already been delivered in the last 30 days. This is equivalent to the computational performance of last year's 10 fastest supercomputers combined.

"We are taking advantage of NVIDIA GPU architectures to significantly accelerate simulations in such diverse areas as climate and meteorology, seismology, astrophysics, fluid mechanics, materials science, and molecular biophysics," said Dr. Thomas Schulthess, professor of computational physics at ETH Zurich and director of the Swiss National Supercomputing Center. "The K20 family of accelerators represents a leap forward in computing compared to NVIDIA's prior Fermi architecture, enhancing productivity and enabling us potentially to achieve new insights that previously were impossible."

Using Tesla K20X accelerators, Oak Ridge's Titan achieved 2,142.77 megaflops of performance per watt, which surpasses the energy efficiency of the No. 1 system on the most recent Green500 list of the world's most energy-efficient supercomputers.(3)

When Tesla K20X GPU accelerators are added to servers with Intel Sandy Bridge CPUs, many applications are accelerated up to 10x or more, including: (4) 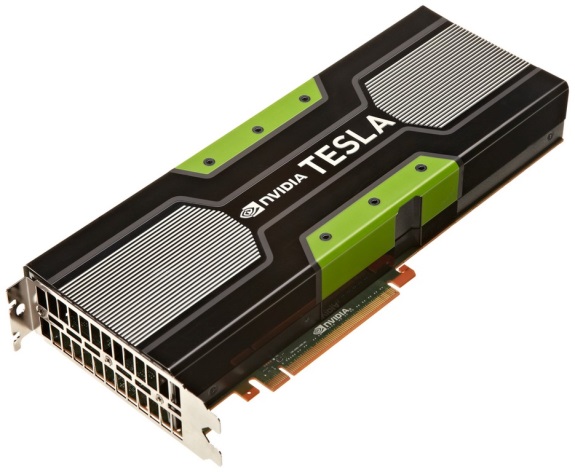