I noticed NV News has already posted a short writetup and some pictures on the new 8x SLI AA and 16x SLI AA modes. Even more image quality tests can be found at HotHardware. However, SLI Antialiasing still needs to be enabled with Coolbits. NVIDIA says the next ForceWare driver will make SLI AA a permanent feature in the NVIDIA control panel. 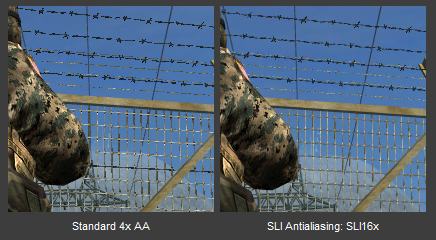 Here's a short list of changes in this release (a full list can be found here): One of the surprising things is that NVIDIA now altered the GeForce 7800 GTX to enter “high temperature” GPU clock speed slowdown mode at extremely cold temperatures (less than -10 degrees C). They also fixed some bugs and fixed a memory allocation issue for all GPUs that caused general instability in a variety of games.

The 77.76 beta driver can be downloaded here.