A leaked AMD roadmap that shows the company's desktop processor plans for 2014-2015 suggests the existing Vishera-based FX CPUs will continue to be offered throughout 2015. While this is in no way official, the slide seems to suggest that AMD is basically giving up on high-end, big-core x86 processors to focus all of its resources on APUs to serve the low-end and mainstream segments of the marketplace.

Other than that the slide reveals that we'll see the launch of Carrizo in 2015, this chip features x86 cores based on Excavator, the next step in the evolution of the Bulldozer architecture. Carrizo will reportedly use the current FM2+ form factor, it will stick to dual-channel DDR3 memory and will have PCI Express 3.0.

Keeping in mind the fact that Corrizo will inherit a lot from Kaveri, expect it to support things like TrueAudio, Mantle, DirectX 11.2, OpenCL 2.0, HAS programming model and so on. What remains unclear is whether Corrizo will be made using 28nm process technology, 20nm manufacturing process or 14nm extreme mobile manufacturing technology.

The next low-end desktop APU is Beema, this chip is slated for mid-2014 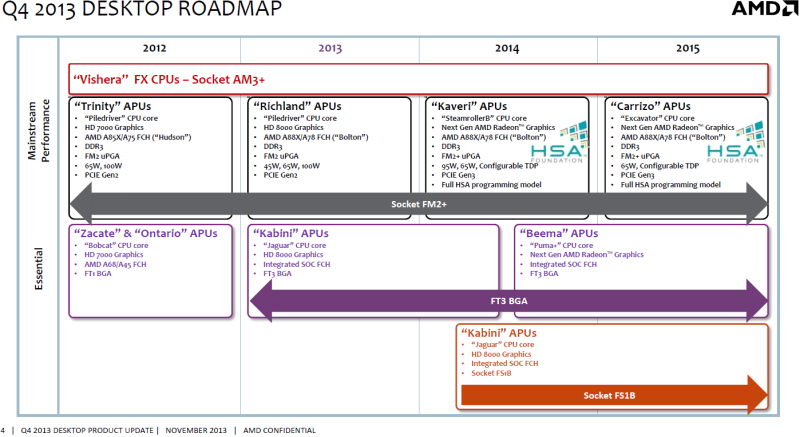