Posted on Thursday, Apr 03 2014 @ 13:03 CEST by Thomas De Maesschalck
Microsoft OS head Terry Myerson officially confirmed at Build on Wednesday that the Start Menu will return. Not a lot of details were shared but it looks like we'll be getting an updated version of the Start Menu with live tiles borrowed from the Modern UI interface.

The software giant also introduces "universal apps", a new type of app that will run across Windows 8.1, Windows Phone 8.1 and Xbox One. Interestingly, you will be able to run these universal app in a windowed mode in Windows 8.1.

Unfortunately, these two features are still in the works. They're not part of next week's Windows 8.1 Update and it's unclear when they will be finished.

The details are hazy, aside from the fact that it's going to be pushed to all Windows 8.1 users as an update at some point in the future. But it's a-coming—though it's not quite the Start menu you're familiar with. Beyond the traditional mouse-friendly features, the Windows 8.1 Start menu will be crammed with Live Tiles, along with the ability to find and install Microsoft's universal Windows apps, also announced Wednesday. 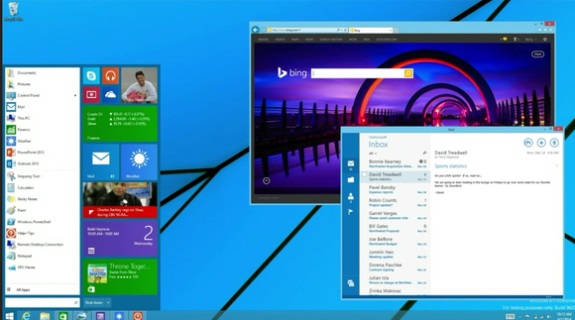