Intel confident it can shrink to 7nm in 2018 without EUV

Speaking at the ISSCC this week, Intel senior fellow Mark Bohr talked about the company's future process nodes. Bohr said he's confident that the current pace of semiconductor technology development can continue beyond 10nm technology (expected in 2016) and that 7nm manufacturing should be feasible in 2018 without moving to expensive manufacturing methods like extreme ultraviolet lasers (EUV).

He further commented that Intel hopes to avoid the issues it experienced with the 14nm process during the 10nm generation, and added that the firm's 10nm pilot manufacturing line is coming along nicely:

Intel was already forced to delay its 14nm “Broadwell” chips by several months due to manufacturing issues, and hopes to avoid that during the 10nm generation.

“I think we may have underestimated the learning rate—when you have a technology that adds many more masks, as 14[nm] did...it takes longer to execute experiments in the fab and get information turned, as we describe it," Bohr said, when asked what went wrong. "That slowed us down more than we expected and thus it took longer to fix the yields. But we’re into high yields now, and in production on more than one product, with many more to come later this year.”

Bohr said that Intel’s pilot 10nm manufacturing line is running 50 percent faster than the 14nm line in terms of major steps per day, which will keep Intel’s 10nm development on track. 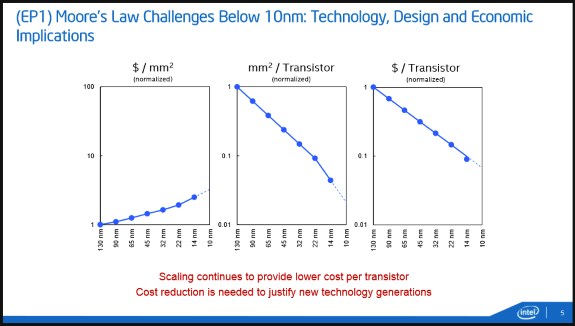