Posted on Wednesday, Aug 19 2015 @ 10:35 CEST by Thomas De Maesschalck
Remember last month's hack of cheating website Ashley Madison? Things have taken a turn for the worst as 9.7GB of stolen data has been leaked online. In a statement, Impact Team claims they released the data because Avid Life Media (ALM) failed to meet their demands, which included the full take-down of Ashley Madison and Established Men:

"We have explained the fraud, deceit, and stupidity of ALM and their members. Now everyone gets to see their data.

Find someone you know in here? Keep in mind the site is a scam with thousands of fake female profiles. See ashley madison fake profile lawsuit; 90-95% of actual users are male. Chances are your man signed up on the world's biggest affair site, but never had one. He just tried to. If that distinction matters."

"Find yourself in here? It was ALM that failed you and lied to you. Prosecute them and claim damages. Then move on with your life. Learn your lesson and make amends. Embarrassing now, but you'll get over it."

Wired posted a screenshot of the contents of the leak and this leak is truly massive as it's 9.7GB of compressed data. It contains anything from member details and hashed passwords, to credit card transactions, addresses, e-maill addresses, phone numbers, etc. 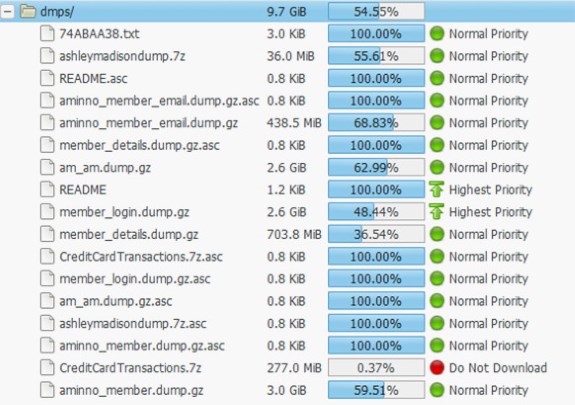 ARS Technica adds the hackers didn't only get their hands on the member data, they also found PayPal accounts and passwords used by Ashley Madison executives, Windows domain credentials for employees, and a large number of secret internal documents.

"The biggest indicators to legitimacy comes from these internal documents, much containing sensitive internal data relating to the server infrastructure, org charts, and more," TrustedSec researcher Dave Kennedy wrote in a blog post. "This is much more problematic as its not just a database dump, this is a full scale compromise of the entire companies infrastructure including Windows domain and more."

Given the scale of this leak and the huge number of victims, we can imagine this isn't going to end well for a lot of people.