Posted on Thursday, Aug 27 2015 @ 18:50 CEST by Thomas De Maesschalck
As feared, the rumors about the Radeon R9 Nano costing $649 turn out to be correct. AMD just rolled out a press release confirming the price but unfortunately it seems this is a total paper launch.

The cards won't be available in retail stores until "the week of September 7, 2015" and not a single card has reached a reviewer, meaning the only benchmark results available today are the cherry-picked results supplied by AMD. The expected availability date is September 10 but it's unknown when you can expect any reviews.

Anyway, the R9 Nano is based on the same 28nm Fiji chip as the Fury X, it offers the full 4096 stream processors with 256 texture units, 64 ROPs and 4GB HBM memory clocked at 1000MHz effective. The card has a 175W TDP and will have a boost clock of up to 1000MHz. This clockspeed will reportedly rarely be hit due to the card's power throttling, the average clockspeed is expected to be more around the 900MHz mark.

The card is designed for compact gaming systems, it's just six inches long and promises to be up to 30 percent faster than the Radeon R9 290X, or more or less the same performance level as a R9 Fury. AMD says the card runs around 75°C and has a noise target of 42dBA versus 58dBA for the R9 290X.

We'll have to wait for some reviews but overall this seems quite the disappointment. If you absolutely want the smallest, best-performing Mini-ITX graphics card this may be a good choice, but in all other cases there are far better and cheaper options. 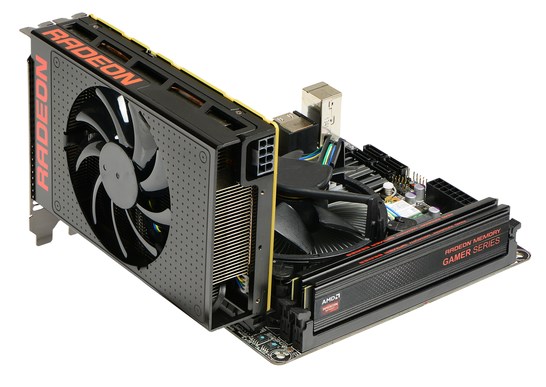 AMD (NASDAQ: AMD) continues to push the boundaries of graphics card design, today announcing its category-creating AMD Radeon™ R9 Nano, the fastest Mini ITX graphics card ever1, to enable 4K gaming in the living room through ultra-quiet, ultra-compact PC designs. First previewed to gamers around the world during the Electronic Entertainment Expo (E3) in Los Angeles in June 2015, the AMD Radeon R9 Nano graphics card is based on the graphics chip codenamed “Fiji”, and is the third “Fiji”-based product to launch this summer alongside the AMD Radeon™ R9 Fury and R9 Fury X graphics cards. The AMD Radeon™ R9 Fury graphics family, based on the “Fiji” chip, marks a turning point in PC gaming with the implementation of High-Bandwidth Memory (HBM) to deliver extreme energy efficiency and performance for ultra-high resolutions, unparalleled VR experiences, smoother gameplay, with the Radeon R9 Nano revolutionizing form-factors for enthusiasts everywhere.

With 30 percent more performance2 and 30 percent lower power3 than the previous generation AMD Radeon™ R9 290X card, the 175W AMD Radeon R9 Nano is the world’s most power efficient Mini ITX enthusiast graphics card. The six-inch long, air-cooled board represents a new class of graphics card, enabling gamers, PC modders, and system integrators to build compact, unique, ultra-small form factors that have never before been possible, opening the door to new, sleek PC designs that are no bigger than a home DVR or videogame console, and look every bit in place beside them.

“With the Radeon™ R9 Nano graphics card, AMD is enabling 4K class gaming in your living room in an exceptionally quiet, ultra-small design built to excel in today’s games and on the latest APIs like DirectX® 12 and Vulkan™. There simply is nothing else like it,” said Matt Skynner, corporate VP and general manager, Product, Computing and Graphics Business Unit at AMD. “Our Radeon™ graphics line-up is ushering in a new era of PC gaming delivering remarkable performance, unmatched GPU designs and groundbreaking technologies. Today is a revolutionary moment for PC gaming, and we are proud to add this distinct product to our well-rounded AMD Radeon R9 graphics lineup.”