Posted on Tuesday, Oct 06 2015 @ 18:12 CEST by Thomas De Maesschalck
Microsoft revealed its its Windows 10 device event that its HoloLens Development Edition will go on sale for $3,000 in Q1 2016. The HoloLens is an untethered device that doesn't require a PC, a phone or even wires. The software giant demonstrated the device with Project X-ray, a new video game where the user battles against holographic robots using a gun controlled by an anolog stick.

Myerson claimed that "HoloLens is the only device that mixes holograms into our world", touting mixed reality entertainment.

Given the elaborated and impressive demonstration of the Project X-Ray game, featuring weapons, shields, enemies, as well as other capabilities of the HoloLens, and whatnot, it will be quite interesting to see how many people are interested in buying the Development Edition of the device for $3,000, which will start shipping in 2016. 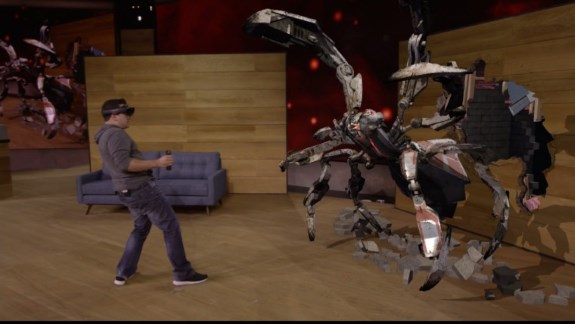