Posted on Wednesday, Mar 30 2016 @ 13:25 CEST by Thomas De Maesschalck
Photos of what are claimed to be the cooling shrouds of NVIDIA's upcoming Pascal-based GeForce GTX 1080 and GTX 1070 video cards are making the rounds. It's impossible to verify if these are real but VideoCardz says they can't spot anything fishy. If these shrouds are real, it would confirm that NVIDIA is going to use the 1000-series for its next-gen cards.

While I’m sceptical about this leak, I do believe that the photos are real. We just can’t be sure if photographs were taken close to the production line, or in a small company where one worker was just so bored that he decided to design those on CNC machine (but would anyone do such a thing?). Also why are those photos so dark, is this a normal thing for CNC production? 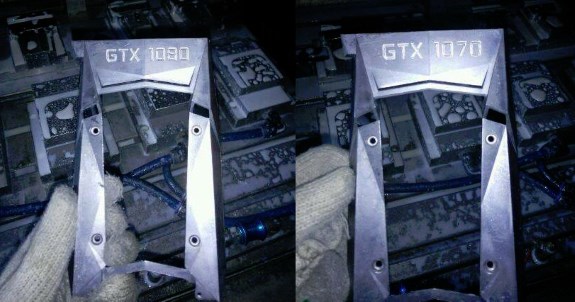 NVIDIA may reveal more about these cards at next week's GPU Technology Conference (GTC) in San Jose.