Posted on Friday, Apr 01 2016 @ 11:18 CEST by Thomas De Maesschalck
When Elon Musk took over the reigns of Tesla Motors he implemented his grand plan to electrify the car industry. Entering the car market as a new comer is no small feat, especially if you plan on revolutionizing the industry. Therefore, Tesla adopted a tiered approach. The company gained a lot of popularity with its Roadster, but that was a car for the super rich early adopters. A bit later we saw the launch of Model S and last year the company rolled out its Model X.

The latter two cars are aimed at the pretty rich but now Tesla is starting to write a new chapter in its history. Yesterday was the grand reveal of the long-awaited Model 3, the first mass market Tesla car for the middle class. The new model achieves a range of 215 miles (346km) and is priced at $35,000.

It has seating for five adults, goes from zero to 60mph in under 6 seconds, has a full glass roof, a 15-inch touchscreen supercharging support and autopilot safety features. Car enthusiasts interested in getting one can reserve a Model 3 for $1,000 but deliveries aren't expected to start until late 2017. Incredibly, Tesla has already taken 150,000 pre-orders for the car! 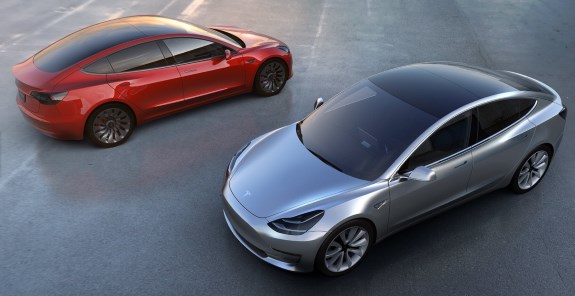