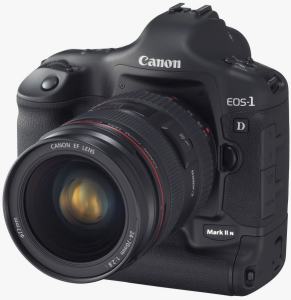 Today Canon presented a new better version of the EOS-1D Mark II model with new refined features to make the camera easier and more precise to use. The new EOS-1D Mark II N digital SLR camera is able to fire at 8.5 frames per seconds for up to 48 full-res JPEG images in a burst, while the previous model could only do 40.

The EOS-1D Mark II N camera shares with the EOS-1 series family its all-metal body and chassis and weather-resistant construction with its shutter durability-tested to 200,000 exposures. And perhaps best of all, the price of the new camera, $3,999, is actually $500 less than the initial price of its predecessor.

To give photographers a more accurate view of the pictures they've shot, the EOS-1D Mark II N model has a beautiful new, 2.5-inch LCD/TFT monitor with 230,000 pixels of resolution for accurate image playback. Its total viewing area is actually more than 50 percent larger than a 2-inch screen and its backlight is brighter with six LED modules. Thanks to the new screen, examining images in playback, checking focus and selecting menu items are now all easier. The improved display enables viewing angles up to a remarkable 170 degrees from any direction.

Sharing the stage with the new, 2.5-inch LCD wide-angle view display are several significant improvements in image playback. For starters, the user can have a magnified view from any selected AF point. Previously, magnified views took the center of the image as the starting point, but a new menu item enables the user to select a specific AF point and magnify the image in 15 steps with the press of a button. Another new feature on the camera is magnified view during Quick Review. When an image is displayed on the LCD monitor immediately after capture, the user can immediately magnify the view to check focus right away. Other improved playback functions include a last displayed image remembered feature and a more complete INFO display which now shows file size and includes notations for monochrome (B/W) and color (R/G/B) when the RGB histogram is enabled.

Photographers always want as many continuous frames as possible. For many pro shooters, even one more shot could prevent that lost photo opportunity. An improved image processing sequence and a better memory management method in the EOS-1D Mark II N digital SLR has ramped up its burst capability with the camera now able to shoot up to 22 RAW frames and up to 48 full-resolution JPEGs in burst. The camera can also shoot 19 frames of RAW+JPEG (JPEG quality: 8, Picture Style: Standard, ISO 100); and at 59 frames or better at the JPEG Middle 1 setting, 77 frames or better at JPEG Middle 2, and 135 or better at JPEG small, a substantial increase. Professional photographers will love the extra margin of comfort that greater burst performance provides. Additionally, the EOS-1D Mark II N digital SLR now creates new folders automatically when file numbers reach 9999, making the new camera more responsive in fast-moving news and sports photography situations. Photographers can even customize the first four characters in filenames, enabling superior image organization and camera identification capabilities.

Just like on the EOS-1D Mark II model, the EOS-1D Mark II N digital SLR lets the user save the same image simultaneously in both the CompactFlash (CF) and SD memory card slots, a highly effective backup mechanism. Photographers can also record to slot one until it was full and then go to slot two as a reserve. Now, with the EOS-1D Mark II N in RAW+JPEG mode, it's also possible to save the RAW and JPEG images separately in each memory card. The RAW images can be saved in slot one and the JPEGs, in any of ten quality levels, in slot two, or vice versa. Since CF cards tend to be larger, currently, than SD cards, the RAW files will be likelier to go on the CF card in slot one, but this is not required. The new option allows images to be recorded separately according to usage, finally realizing a great potential benefit of the dual slot configuration.

In the analog era, photographers would select the brand of film that suited their own shooting style or the subject being photographed. In the digital era, they have to rely on the image quality features and settings provided by the camera manufacturer. Some users though have experienced confusion about what effects these settings would have on the image. To provide better clarification, a new feature called Picture Styles combines processing parameters and color matrix settings into easy settings designed to obtain the desired effect, almost like choosing a type of film to obtain a specific result.

For users who do not want to bother with post processing, there is a 'Standard' setting within the Picture Styles mode that helps to produce images that look crisp and vivid with the sharpness set to mid-scale and the color tone and saturation set to obtain vivid colors. In the 'Portrait' setting of the Picture Styles mode, the color tone and saturation are set to obtain nice skin tones with the sharpness set one step weaker than the Standard setting so the skin and hair look softer. Under the 'Landscape' setting of the Picture Styles, the color tone and saturation are set to obtain deep blues and greens, the sharpness is set one step stronger than Standard so the outline of mountains, trees and buildings look more crisp. The Neutral setting is the same as the default setting for EOS-1 series cameras where natural color reproduction is obtained and no sharpness is applied. This is the ideal setting for post-processing. The Faithful setting is the same as Digital Photo Professional's Faithful, so when the subject is photographed under a color temperature of 5200K, the color is adjusted colorimetrically to match the subject's color with no sharpness applied. Monochrome is the same as the EOS 20D camera's monochrome setting and with User Defined, the user can create and save their own preferred settings.