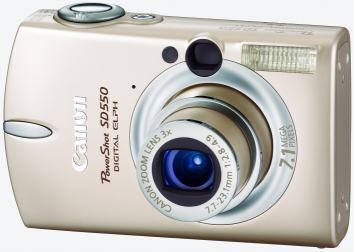 Canon today presented new SD550 and SD450 digital ELP cameras with a sensor of repectively 7.1 and 5 megapixel. They both have a bigger screen as their predecessor, while retaining the small compact package. Combining function with fashion, the stylish new 5.0 megapixel PowerShot SD30 Digital ELPH series focuses on fall colors and optical zoom lenses. The PowerShot SD550, SD450 and SD30 Digital ELPH cameras will be available in September for $499.99, $399.99, and $399.99, respectively.

"The PowerShot SD550 and SD450 Digital ELPH cameras have essentially the same body sizes and specifications as the PowerShot SD500 and SD400 Digital ELPHs, but offer consumers a wider range of options when choosing the right camera for their lifestyle," said Hashimoto. "By providing users with the ability to choose, Canon will always have something that fits each user's individual tastes. Furthermore, by keeping the optical viewfinder, we still provide the user the ability to use these cameras in all types of lighting conditions."

Metallics are back! Designed with the fashion conscious trendsetter in mind, the PowerShot SD30 Digital ELPH camera comes in four new attractive colors designed to coordinate with other fashion accessories for a night on the town. Replacing Canon's previous line of fashion-focused cameras, the PowerShot SD20 Digital ELPH series, the new models keep in line with fall 2005 fashion's "must have colors" for the season. The PowerShot SD30 Digital ELPH cameras will be available in the metallic finishes of Tuxedo Black, Rockstar Red, Glamour Gold and Vivacious Violet. These cameras also come with color coordinated cases for each camera color.

Canon's new PowerShot SD30 Digital ELPH models will be supplied with a new Camera Station, the CS-DC1, which lets consumers easily charge their camera. It also enables video output, image transfer to a PC and direct printing, via the supplied wireless remote control.

True to the PowerShot tradition, these three new PowerShot digital cameras have many of the latest advances in Canon technology including the proprietary DIGIC II imaging processor. The processor enhances picture definition, vibrancy and quality, while helping increase the speed of the cameras' startup, autofocus, shutter response, playback and image processing speed and reducing power consumption by 35 percent compared to the original DIGIC chip. Image transfer speed is accelerated (when used with a USB 2.0 compatible computer, printer or other peripheral), thanks to the inclusion of a Hi-Speed USB 2.0 port. The USB 2.0 port is backwards compatible (at no increased speed) with computers featuring standard USB 1.1 connections.