If there's one site that excels in scoring GPU exclusives it's Videocardz. This time the website got its hands on some of the launch slides of NVIDIA's GeForce GTX 1050 lineup.

The GeForce GTX 1050 Ti on the other hand has somewhat lower clockspeeds but has a full GP107 GPU with 768 CUDA cores, 48 TMUs, 32 ROPs, a 1290MHz base clock, 1392MHz Boost and 4GB GDDR5 memory cocked at 7008MHz. Both cards feature a 128-bit memory bus and have a TDP of 75W, which means they do not not need external power although models may feature this to enhance overclocking potential.

The information in this article is expected to be released by NVIDIA later today but this will be a paperlaunch, actual card availability and reviews aren't expected until October 25th. There will be wide availability from NVIDIA's partners and most of these cards will be relatively compact.

The biggest surprise is that the pricing is lower than anticipated. The suggested retail price for the GTX 1050 is said to be $109, whereas the GTX 1050 Ti should be available from $139. 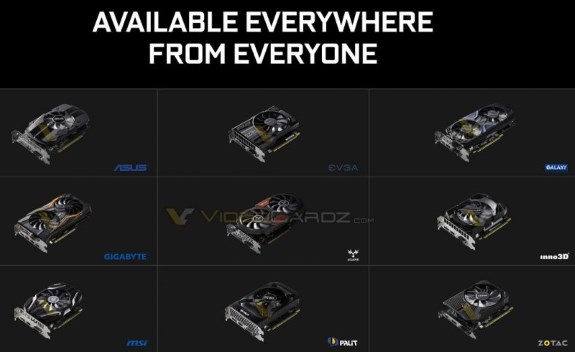 More photos of models from NVIDIA's AIB can be viewed over here.