WCCF Tech got its hands on a photo that reveals what is claimed to be an official marketing slide from AMD that highlights the performance of the Ryzen 7 1700X vs the Intel Core i7 6800K. The MSRP of the Ryzen 7 1700X is about $25 less than the 6800K so this is a natural comparison to show the bang for the buck Ryzen can deliver.

The slide below compares both systems running the games at maximum quality settings and a 1440p resolution. Curiously, AMD used the NVIDIA GeForce GTX 1080 for this test. In general, the 6800K is a bit faster than the Ryzen 7 1700X but the difference is very small. 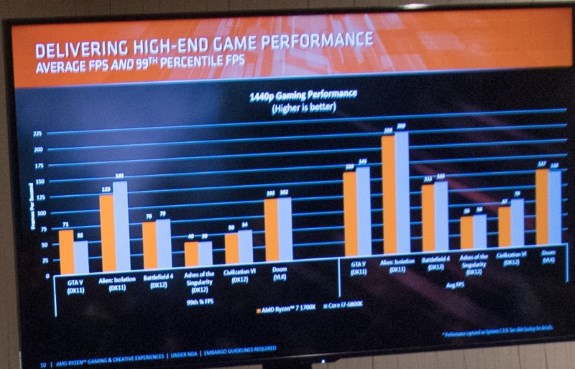 Head over to WCCF Tech for tables with the average FPS and 99th% FPS scores. Moreover, they also have a slide that shows the Ryzen 7 1700 versus the Core i7 7700K.

Overall the conclusion here is that these chips offer roughly the same raw performance, with Intel having a slight edge. There are some rumors AMD has better performance/Watt but we'll have to wait until tomorrow to know for sure. With a slight price cut on Intel's processors the equation rapidly tilts in Intel's favor. Whatever happens, it's likely going to be good news for consumers.

This will probably be the last Ryzen performance leak we post, it doesn't make sense to cover all these little leaks in detail as objective reviews will arrive tomorrow.