At the second day of its IDF, Intel talked about the next-generation Xeon processors. The Tulsa will be a dual-core 65nm part with 16MMB shared L3 cache, Virtualization Technology (VT) and Pellston Technology (PT). It will be part of the Truland platform and the chip will feature a total of 1.3 billion transistors. The release will follow in the second half of 2006. 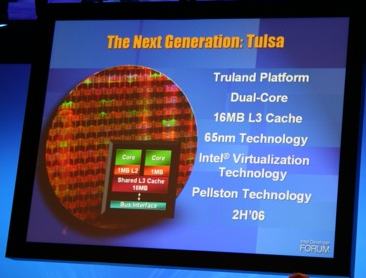 Intel says Bensley will deliver up to 3.5 times the performance per watt of today's generation. Additionally, Bensley will also be compatible with both the Dempsey and Woodcrest processors which will be released later next year. More details at AnandTech