Intel hypes up its Optane 16GB and 32GB memory for desktops

Intel client computing group senior vice president and general manager Navin Shenoy send out a press release that reveals the benefits of the company's Optane memory. The chip giant recently revealed Optane for servers and now it shows off a variant for desktop PCs. It will be offered in 16GB and 32GB modules, with availability from April 24th. 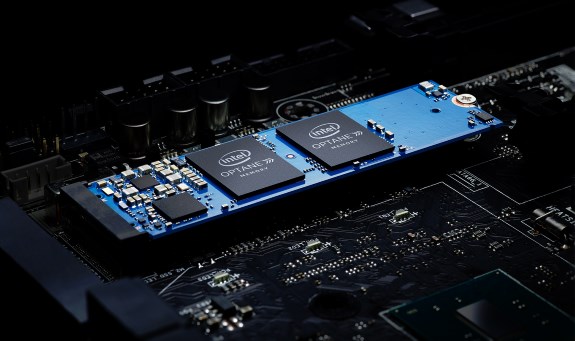 Throughout my years at Intel, I've seen the incredible impact technology can and will have on peoples' lives: from virtual reality saving lives in the hands of a surgeon to the power and potential of 5G for autonomous driving. But let's not forget, one of the most pervasive and impactful technology innovations of our time continues to be the one we use day in and day out: the personal computer.

Whether you are staying connected with loved ones, streaming an epic moment of game play, or researching that next big project, computers are woven through almost every aspect of our lives. At Intel, we strive to push the boundaries of technology to help people be more creative, have more fun or be more productive. One of the best ways to do this is to fundamentally improve the daily computing experience.

To put this in perspective, on a given day, most people launch 11 apps, and then launch each app seven times.1 With the increased speed and responsiveness of Intel Optane memory in a 7th Gen Intel® Core™ processor-based system, you can power on your computer up to twice as fast and improve overall system performance up to 28 percent faster with storage performance up to 14x faster.2,3 Applications like Microsoft Outlook* will launch up to nearly 6x faster, the Chrome* browser launches up to 5x faster, games launch up to 67 percent faster, and levels load up to 65 percent faster.2,4

How Intel Optane Memory Works
The insight for creating Intel Optane memory was simple: No one likes to wait. Waiting for games, movies, videos, hi-res photos or large files in your Outlook inbox to load is just plain frustrating. And the reason for the wait is also simple: It comes down to data.

The amount of data the average person creates, uses and saves these days is skyrocketing. For example, Windows 10* requires around 20GB disk space and one of the hottest PC games, Grand Theft Auto V* requires approximately 65GB of hard disk space.5 Add to this an ever-increasing number of personal videos and pictures, including 4k content, and the amount of storage the average person needs multiplies quickly.

Today, the way most people are dealing with their storage needs is through traditional hard drives. In fact, 79 percent of desktop PCs still use hard disk drives as the primary storage.6 But while a hard drive may address the storage issue, it also slows down a system and makes it feel less responsive.

That's where Intel Optane memory comes in. It increases the speed of application, game or large file loading so people don't have to wait nearly as long. It does this by ensuring the data contained in a PC's storage is more readily accessible, which means an overall faster, more responsive experience.

How to Get Intel Optane Memory
Intel Optane memory is a member of the new and growing family of Intel Optane technologies built with Intel's advanced system memory controller, interface hardware and software IP.

Today, we are announcing the Intel Optane memory module (16GB and 32GB) for desktops with availability beginning April 24 for customers who want to install them in their Intel Optane memory ready motherboards or systems. In addition, starting in the second quarter of this year, PC manufacturers like HP*, Dell*, Lenovo*, Asus, Acer* and others will begin shipping both consumer and commercial products equipped with Intel Optane memory. More information can be found at Intel.com/optanememory.

This new innovation in memory, with 7th Gen Intel Core processor-based PCs, and other Intel technologies are paving the way for the future of computing. These advancements change the way we interact with our devices and the world around us, from gaming to virtual reality and everyday productivity. It's never been a more exciting time for the PC industry.