Apple making its own mobile GPU, to dump Imagination within two years

Imagination Technologies investors received a cold shower today as shares closed 61.60 percent lower on news that Apple will stop using Imagination's intellectual property within 15 to 24 months. Imagination said Apple will be adopting "a separate, independent graphics design", which strongly suggests Apple is making its own mobile GPU for the future Apple A12 SoC.

The company says it will negotiate with Apple about potential alternative ways to license its technology. Imagination Technologies stresses that developing a mobile GPU is very complicated and claims Apple is unlikely to be able to do so without infringing on its patent portfolio. Apple on the other hand is confident it can design a GPU without Imagination's technology:

However, Imagination Technologies disputes the claims that Apple will be able to rollout an independent GPU architecture without infringing on its patent portfolio. In a statement, the company said: 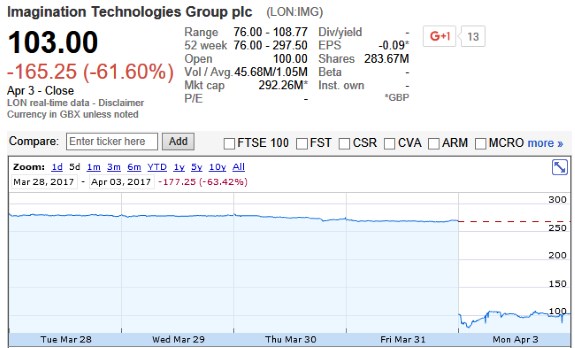