Acer showcased its Predator Triton 700 ultra-thin gaming laptop and one of the interesting things about this system is that it uses an announced NVIDIA GPU. The Predator Triton 700 is one of world's thinnest gaming laptops, it's just 18.9mm thick and weighs 2.6kg yet it delivers a lot of gaming horsepower thanks to a powerful Intel processor and the use of what is a new version of NVIDIA's GeForce GTX 1080.

NotebookCheck reports NVIDIA will announce these new cards at Computex. The company created lower-power versions of its GTX 1070 and GTX 1080 GPUs, these will be known as "Max-Q" and will be ideal for use in ultra-thin gaming laptops. The GTX 1080 used by the Triton 700 pre-production sample at the Acer press conference was identified as the GP104M, it ran at 1290MHz but Acer said this it not indicative of the final product.

At the event, Acer revealed its Triton 700 will be capable of scoring 17000 points in the 3DMark 11 Performance test. This suggests the Max-Q version of the GTX 1080 will be only about 15 percent slower than the regular model:

This is the point where we start to speculate: We have information that Nvidia will announce new graphics chips at the upcoming Computex. The preliminary designation for the low-power versions of the high-end GPUs GTX 1070 and GTX 1080 is "Max-Q". Compared to their regular counterparts, they are supposed to be more efficient and therefore require less cooling performance in combination with slightly reduced performance. The power consumption of the GTX 1070 is supposed to drop from 120 Watts to around 90 Watts, or from 165 Watts to around 110 Watts in the case of the GTX 1080.

This would allow the implementation in particularly thin laptops, so the Acer Triton 700 would be a great choice when you consider the price and the announced benchmark score. We tend towards to a Max-Q version of the GTX 1080 at 17000 points, because the benchmark scores are between 17000 and 22000 points (19851 points on average). This means the Acer Triton 700 – equipped with a putative GTX 1080 Max-Q GPU – would be ~15% slower compared to our average score for the regular GTX 1080. The power consumption is significantly lower, so this is a realistic assumption. 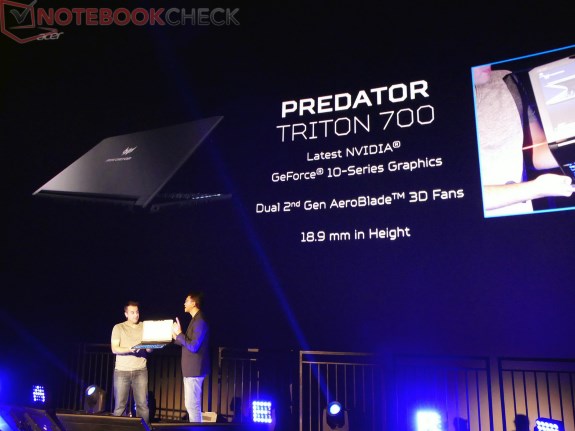 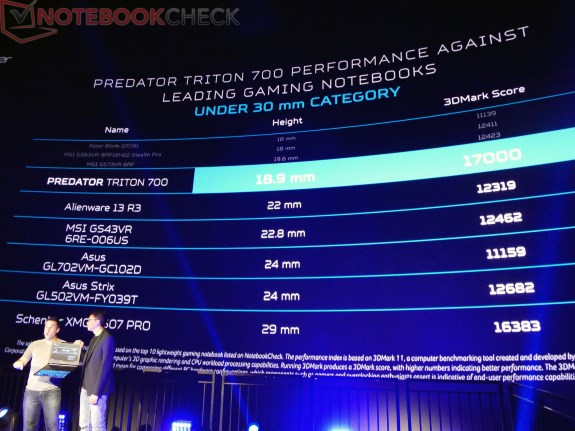