Posted on Sunday, July 09 2017 @ 22:47 CEST by Thomas De Maesschalck
Biostar introduces its TA320-BTC, a new budget motherboard for cryptocurrency mining like Ethereum. This product uses the AMD A320 chipset and is designed for Socket AM4 chips like the new Ryzen CPUs or the Bristol Ridge APUs. There is support for up to six GPUs thanks to one PCIe 3.0 x16 slot and five PCIe x1 slots. Biostar did not mention a price nor availability date. 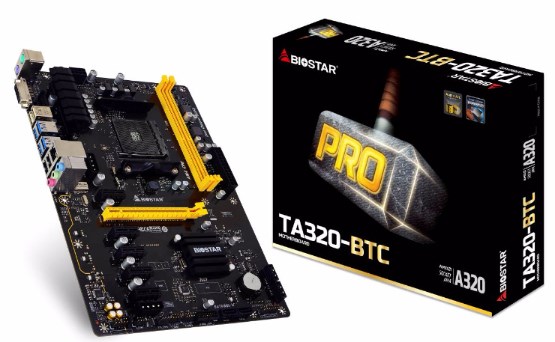 BIOSTAR proudly announces the BIOSTAR TA320-BTC, a versatile mainstream motherboard that not only is a great price performance crypto mining platform, but also well suited for essential computing needs with media playback functions. With a low-entry price point, the TA320-BTC should top anyone’s list when considering entering mining craze, especially with its scalability of up to 6 graphics cards.

The TA320-BTC is built with stability in mind, as it uses 100% solid capacitors for high-endurance operation and supports easy maintenance via BIOS-Flasher and BIOS Online Update utilities. To ensure the board is well protected, it includes: BIOSTAR’s exclusve Anti-Surge design to reduce unexpected shocks from overvoltage transients, Super LAN Surge Protection to prevent damage from lighting strikes and electrial surges, ESD Protection to avoid overstress (EOS) conditions, Iron Heart Protection which protects the board from heavy CPU coolers by strengthening the back PCB of the CPU and OC/OV/OH Protection to detect overvoltage conditions and prevents voltage surges from spreading.

Selecting the Right Components with BIOSTAR 3-A Concept
BIOSTAR 3-A Concept is based on the AMD eco-system platform (i.e. BIOSTAR TA320-BTC, BIOSTAR Radeon™ graphics card and AMD Ryzen™), ensuring that the components work in perfect harmony for the ultimate crypto mining platform.

If you have decided to go with the AMD platform, the BIOSTAR TA320-BTC fits the bill with it’s low up-front cost and providing long-term stability without sacrificing performance.