Some new roadmaps leaked that reveal the expected availability of Intel's 9th Gen Core processors. Based on currently available information, Intel is planning to release these chips in October.

That's a bit later than previously expected. The launch will include the Core i9-9900K, i7-9700K and i5-9600K processors, as well as the Z390 chipset. Interestingly, the slide also mentions the Core-X "Basin Falls Refresh" for October.

Not only that, Core-X series (Basin Falls Refresh) will also launch in October, but the roadmap lacks any mention of 28-core SKU, which was demonstrated by Intel at Computex. The Core-X series for HEDT platform will reach up to 165W TDP.

The Coffee Lake-Refresh series will offer three SKUs at launch, but more will be added in Q1 2019. 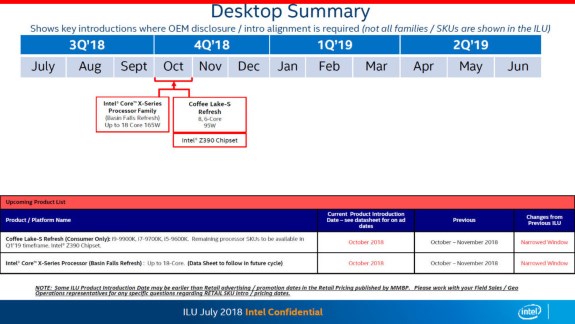