Posted on Wednesday, Nov 14 2018 @ 14:16 CET by Thomas De Maesschalck
Here's the first publicly known supercomputer deal for AMD's Zen 2 design. The High Performance Computing Center Stuttgart (HLRS) of the University of Stuttgart in Germany will build Hawk - a new supercomputer with 10,000 AMD EPYC "Rome" processors. Each processor has 64 cores, resulting in a system with a total of 640,000 cores. Hawk will be deployed in 2019.

At the SC18 conference, the German institute revealed they will use EPYC processors with a frequency of 2.35GHz. This is the first time we hear a confirmed frequency for an EPYC "Rome" processor.

The slide describes Hawk as a 640,000 core system using 64-core Rome CPUs. That’s 10000 CPUs, listed at a throughput of 24.06 PetaFLOPs. That gives 2.4 TeraFLOPS per CPU, which at 16 SP flops/cycle, works out about correct for a 64 core CPU for the 2.35 GHz frequency mentioned in the slide. This would appear to be a base frequency, although AMD’s Naples processors do offer a ‘constant frequency’ mode to ensure consistent performance. Main memory was listed as 665 TB, with 26 PB of disk space. It was not disclosed the breakdown of how the disk is split between NAND and HDDs. 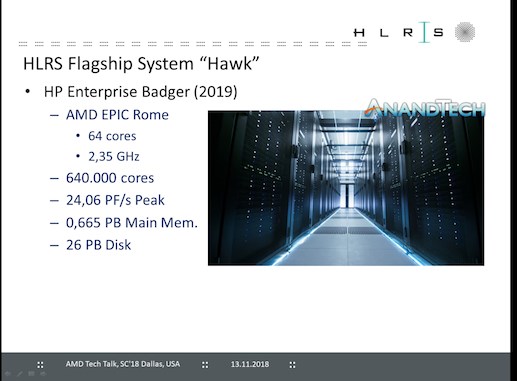