AMD and TSMC point at rapid ramp of 7nm

In recent weeks, there's been quite a bit of chatter about the high utilization rate of TSMC's 7nm capacity. Customers are having issues with getting enough supply so naturally there was concern about how this would impact the supply of AMD's Ryzen 3000 series for the desktop market and the EPYC "Rome" server CPUs.

At a recent investor presentation, AMD and TSMC tried to convince the audience that there will be enough supply. TSMCs new marketing chief, Godfrey Cheng, pointed out that the ramp of 7nm is going extremely fast. The foundry is able to ramp production capacity quicker than any other node in its history.

At the recent ‘Rome in Rome’ investor presentation Godfrey Cheng, TSMC’s head of global marketing, took to the stage alongside AMD’s Mark Papermaster to demonstrate its ability to supply AMD, and its customers, plenty of 7nm silicon. Because if you fail to deliver the right product at the right time you “commit the cardinal sin of actually leaving demand on the table, and that’s not what we do.”

TSMC also revealed that it's not only a production partner but also a client of AMD's products. The Taiwanese foundry showed that it has a suite of servers in its datacenter that use the EPYC 2 processor. 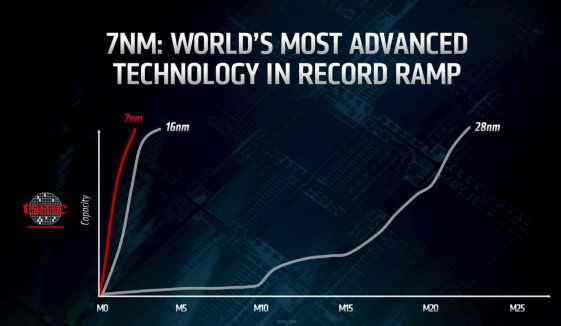