Posted on Thursday, Dec 17 2020 @ 18:07 CET by Thomas De Maesschalck
I don't often cover Bitcoin on DV Hardware as this is not an investing website but every once in a while there's news worth covering as crypto has a keen following in the tech community as well as implications for some hardware components. For example, some cryptocurrencies are profitable to mine on GPUs and the renewed interest from miners can exacerbate the shortages already seen with NVIDIA's GeForce RTX 30 series and AMD's Radeon RX 6000 lineup.

Bitcoin has been existence since 2009 and gained a lot of notoriety a couple of years ago as the entire cryptocurrency market became a massive bubble. In late 2017, the price of Bitcoin peaked just south of the $20,000 mark and then collapsed to under $3,300 towards the end of 2018.

After a long and painful bear market, the price of Bitcoin started ascending again in 2019. Over the past couple of months, the world's most popular cryptocurrency has resumed its climb to new heights.

Now a new all-time high has finally been reached. Yesterday Bitcoin hit the $20,000 mark and this launched another buying frenzy, with an all-time high of $23.586,91 today. Since October, the value of Bitcoin has more than doubled.

It will be interesting to see what is next. Opponents of Bitcoin believe cryptocurrency is basically worthless and a giant waste of electricity, while proponents view it as a new store of value that could rise tenfold or more. 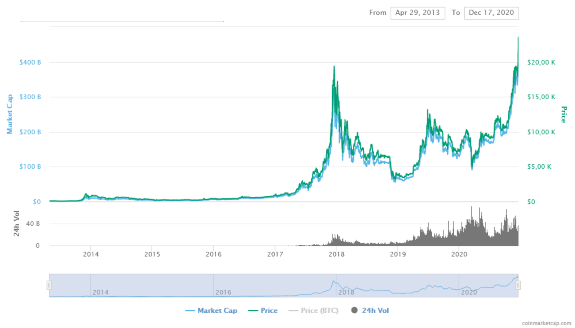