Various announcements from Intel at CES 2021. We'll cover them quickly.

First up, Intel released its Tiger Lake-H35 processors. These new 11th Gen Core CPUs for ultraportables have a 35W TDP. There are three models, all three have four cores and eight threads. The fastest version is the Core i7-11375H Special Edition, it has a single-core Boost of up to 5.0GHz. The Tiger Lake-H series with 45W TDP should follow by May/June, that series will include parts with eight cores and sixteen threads. Intel also mentioned Tiger Lake-H will do up to 5.0GHz Boost on multiple cores.

Next there was a demonstration of Rocket Lake-S. As you may know, this is an upcoming 14nm desktop processor that combines Cypress Core based cores with Xe-based integrated graphics. The chip giant confirmed Rocket Lake-S will have maximum eight cores and reaffirmed it will have 20 PCI Express 4.0 lanes.

Intel compared an Rocket Lake-S Core i7 8-core CPU against an AMD Ryzen 7 12-core CPU in Metro Exodus. Both systems used the NVIDIA GeForce RTX 3090 video card. As you can probably guess, the Rocket Lake-S took the lead. Not a surprise as Intel picked the test and Metro Exodus is a game where AMD does poorly. Based on recent rumors, Rocket Lake-S will be available in March.

Spanish tech site Geeknetic notes Intel also showed off a system with the future Alder Lake-S processor. The company confirmed Alder Lake will use Enhanced 10nm SuperFin. Alder Lake will make its debut for both the desktop and laptop markets. The new model will combine up to eight high-performance cores with up to eight high-efficiency cores. Sort of like ARM has been doing for quite some time now with the big.LITTLE system. 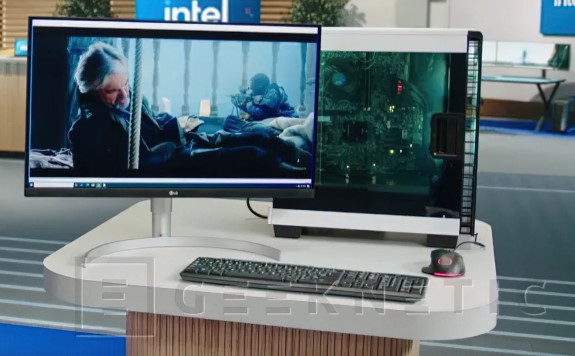