Today's big news from NVIDIA is the launch of a new GeForce 436.02 "Gamescom Special" video driver. The new release will be published sometime later today and it packs quite a lot of exciting stuff.

First up, NVIDIA promises performance gains of up to 23 percent for its RTX SUPER video cards in games like Apex Legends, Battlefield V, Forza Horizon 4, Strange Brigade and World War Z. This is versus the GeForce 431.60 driver. The biggest gains are recorded in Apex Legends. 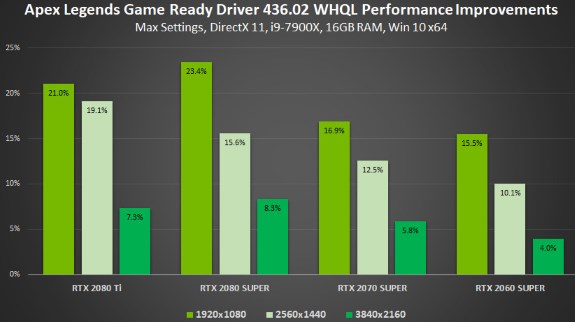 New Ultra-Low Latency Options For Faster Input Response We know that gaming isn't just about raw FPS - gamers also want great image quality and faster response times. So we're introducing a new Ultra-Low Latency mode that gives gamers the ability to get the low latency feeling of high framerates, without having to compromise their graphics quality settings or resolution to get there.

With the release of our Gamescom Game Ready Driver, we're introducing a new Ultra-Low Latency Mode that enables 'just in time' frame scheduling, submitting frames to be rendered just before the GPU needs them. This further reduces latency by up to 33%.

Low Latency modes have the most impact when your game is GPU bound, and framerates are between 60 and 100 FPS, enabling you to get the responsiveness of high-framerate gaming without having to decrease graphical fidelity.

GeForce 436.02 also adds 30-bit color support for the GeForce and TITAN series, and has a new Sharpen Freestyle filter in the GeForce Experience tool.

Retro and Pixel Art games like FTL, Hotline Miami, and Terarria are loved by many in our GeForce community. When played on higher-resolution displays, though, many pixel art games have to scale to fit the display, resulting in a blurry image. To address this, our community requested an image scaling mode called Integer Scaling, which preserves detail on pixel-art games when the resolution is increased.

Well, we've heard the call, and thanks to a hardware-accelerated programmable scaling filter available in Turing, GPU Integer Scaling is finally possible!

When enabled in retro games, emulators and pixel-art titles that lack resolution-scaling filters, the difference in clarity and fidelity is dramatic:

Please note, if you make your own image comparisons, they cannot be created with traditional screenshot techniques as the display scaler will be compared to the GPU scaler. Instead, photograph the display, or use a hardware capture card that records the final image as output to the screen.