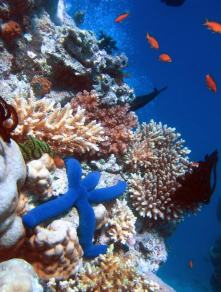 Australian Federal Tourism Minister Fran Bailey suggested to use "shade cloth" attached to pontoons over parts of the Great Barrier Reef off Queensland to protect it from the harmful effects of global warming.

It's feared that global warming could bleach the reef and the minister is concerned about this because it's a $5.8 billion tourist industry that employees 33,000 people.

Earlier this week, Britain's Stern report said climate change could cause a global economic downturn and bleach the reef.

Ms Bailey says the shade cloth idea came from a scientist who found that coral in natural shade was healthier than that in direct sunlight.

"And [he] discovered upon coming up to the surface, that that part of the reef that had vibrant colours was actually being given natural shade."