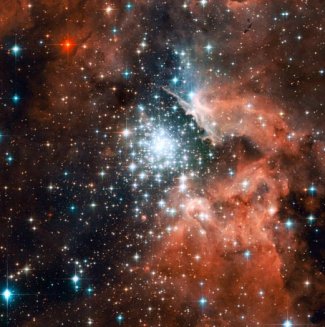 The Hubble Space Telescope made a pretty sharp image of the NGC 3603 nebula which includes some of the Milky Way's biggest stars:

Inside the NGC 3603 nebula, the stars run the gamut in age and mass—allowing scientists to analyze stars in different stages of their life cycles.

Released today, the new image suggests NGC 3603, which is about 20,000 light-years away, gathers its biggest stars at its core. It also shows that the nebula's dense distribution of stars mirrors other young clusters in the Milky Way, Jesús Maíz Apellániz, leader of the Hubble investigation, said in a statement.

The brightest stars in the image appear blue. Ultraviolet radiation and violent winds from these stars have created a large cavity in the reddish debris enveloping the cluster.