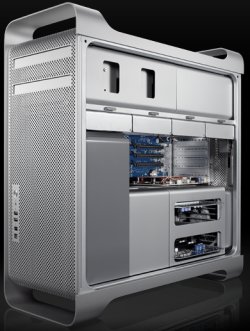 The new Mac Pro features the latest Quad-Core Intel Xeon 5400 series processors based on state-of-the-art 45nm Intel Core microarchitecture running up to 3.2 GHz, each with 12MB of L2 cache per processor for breakthrough performance and power efficiency. With a new high-bandwidth hardware architecture, dual-independent 1600 MHz front side buses and up to 32GB of 800 MHz DDR2 ECC FB-DIMM memory, the new Mac Pro achieves a 61 percent increase in memory throughput.