Posted on Wednesday, Feb 06 2008 @ 20:19 CET by Thomas De Maesschalck
Something odd is going on in the Middle-East. Engadget writes already five undersea cables have been cut since the end of January:

If you're reading Engadget today because your favorite Iranian gadget blog is offline, here's why: a fifth undersea cable has now been reported as cut, responsible for knocking Iran and a few other million people mostly off the interwebs. Things were already looking awfully suspicious when a fourth undersea cable in the Mediterranean was cut yesterday, and while nothing about a fifth cable being cut necessarily means some sort of sabotage is to blame, it's not exactly reassuring. 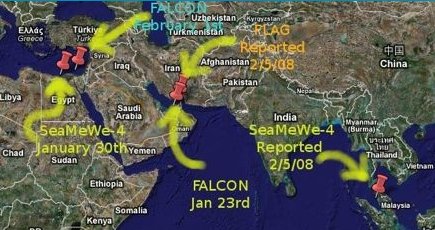