Posted on Friday, Feb 08 2008 @ 00:19 CET by Thomas De Maesschalck
It's been a while since we've heard something about Chieftec but earlier this week TweakTown reported the firm has released a new series of cases for gamers.

The Chieftec Aegis CX-05 features a somewhat odd design with two front doors and a mounting plate that holds up to 10 CD/DVDs.

Just on time, at the turn of the year CHIEFTEC with the AEGIS CX-05 presents a new Gamer chassis. Optically, the new AEGIS CX-05 captivates by its bicolor front, split-up into two. Behind the upper front flap, a 3½” and four 5¼” bays are concealed. A smart idea is the practical DVD/CD mounting plate behind the lower flap, which can easily accommodate up to 10 discs. Between the two flaps of the front panel are installed with all connections, within grasping height, which are needed for an unlimited gaming pleasure. 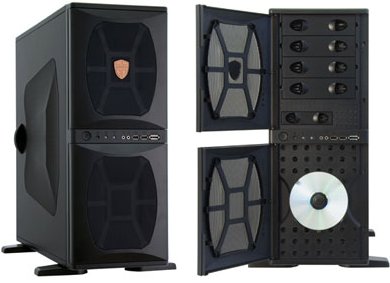