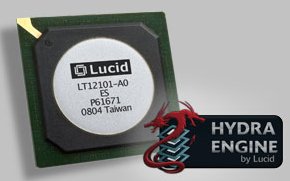 LucidLogix, a startup working on universal multi-GPU technology, has secured $18 million in funding from Rho Ventures and some other parties. Last year the firm already received some funding from Intel Capital.

The investment from Rho Ventures with participation from existing investors Genesis Partners and Giza Venture Capital is the largest to date and brings total capitalization of Lucid to $32 million. It is noteworthy that the company that is focused on developing products aimed at premium-class personal computers and similar devices received funding amid economic downturn.

Lucid intends to use the funds for commercializing the company’s already announced and demonstrated Hydra multi-GPU technology and development of next generation products. It is interesting to note that LucidLogix promised to start volume shipments of the Hydra 100 engine for multi-GPU applications in Q4 2008, but there are a little more than two months left in the year 2008 and there are still no signs of Lucid’s Hydra approaching the market.