You’ll notice some similarities with their previous reference boards including those from Z77 and X79 with the black PCB and blue colour scheme that surrounds it, but with Intel being Intel, it would be wrong not to use their own blue colouring, right? It uses an ATX form factor and is jam packed full of features, so we will try to highlight a few that we can see from a visual perspective, as we don’t really want to get in trouble for breaking any NDA’s.

Around the CPU socket we find two Intel branded blue heatsinks, with one quite small and the other quite the opposite with it being on the large scale and including a skull as we’ve see before from Intel. There is still plenty of space around the CPU socket and a single 8-pin ATX power connector gives us an idea on the power delivery for the CPU giving us a small indication as to what we can work with in terms of overclocking. 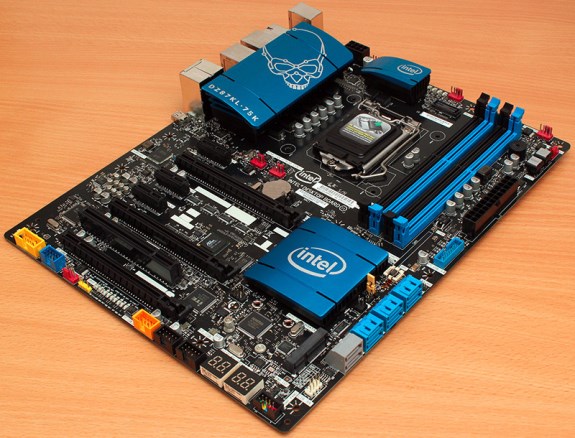