ASUS shows off its Computex lineup

Posted on Monday, Jun 03 2013 @ 19:55 CEST by Thomas De Maesschalck
ASUS send out word about the new products it will show off at Computex. Details about the company's new Z87 motherboard lineup can be found over here.

ASUS is also proud to share that the Z87-DELUXE/DUAL is the first Intel® 8 series-based motherboard certified for Intel® Thunderbolt™, shipping with two ports of the advanced connectivity standard. The previously unannounced Z87-EXPERT was unveiled today, joining the ASUS Z87 motherboard range and also featuring Thunderbolt™ technology.

“Intel and ASUS have worked closely on the implementation of Thunderbolt technology onto ASUS motherboards over the last year”, said Jason Ziller, Intel’s Director of Thunderbolt Marketing. “The Z87-DELUXE/DUAL is the first Thunderbolt-certified Intel 8 Series motherboard in the industry, once again demonstrating their solid design and compatibility.”

Content such as photos and videos can be transferred from smart devices to desktop PCs with a tap. NFC EXPRESS automatically backs up content added to Android devices since last syncing them with a desktop PC. The Remote Desktop function allows for viewing and controlling PCs via Android smartphones and tablets, while Quick Launch saves shortcuts to favorite apps, which can then be started with the ease of a single tap. NFC EXRPESS also allows for password-free Windows 8 login, so users can go directly and quickly into the operating system.

With NFC EXPRESS, simplified Windows 8 access and interaction become available to a wider user audience, whether for personal or professional use. As an added bonus the device includes two USB 3.0 ports that transfer data at up to ten times the speed of USB 2.0. The Z87-DELUXE/DUAL motherboard ships bundled with NFC EXPRESS, which is also available to purchase as a separate accessory.

UEFI BIOS: upgraded with new functions and sleeker mouse control
Redesigned especially for ASUS Z87 motherboards, the latest version of media-acclaimed ASUS UEFI BIOS has been made even more accessible to customers, irrespective of skill level. 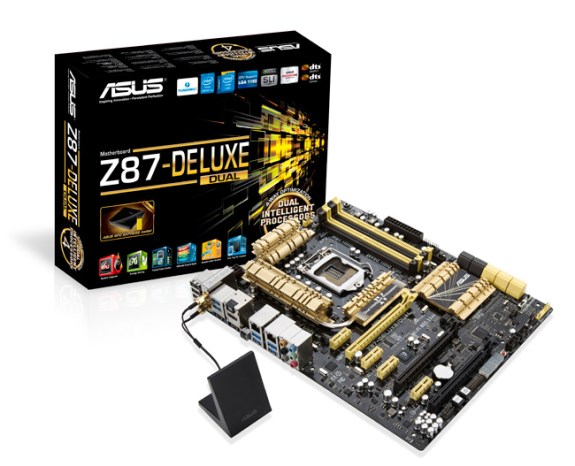