Microsoft to shut down TechNet on August 31

Microsoft surprised everyone yesterday by announcing that it will shut down its TechNet subscription service on August 31, 2013. The service saw its debut in 1998 as a massive packed of CDs, and eventually evolved into a download option as broadband connections became common. TechNet provides enthusiasts with access to virtually all of Microsoft's desktop and server software, with multiple product keys, with pricing starting at just $199 a year.

TechNet was a quite popular service but it suffered from a lot of abuse. The service was intended to give enthusiasts and software developers the opportunity to evaluate and test software, but many users used it to acquire cheap licenses, or worse, to sell pirated versions of Microsoft's software with serial keys obtained via TechNet. This practice was quite lucrative for pirates, as the software keys continued to function even after the TechNet subscription expired, so Microsoft already tried to clamp down on this in recent years by placing limitations on the number of keys a TechNet subscriber could obtain. Unfortunately, now Microsoft is cancelling the program entirely, leaving only the MSDN subscriptions, which start at $699 a year.

In the e-mail copied below, Microsoft explains new subscriptions won't be accepted after August 31, 2013, and that existing subscribers may renew their subscription for one last time until September 30, 2013. 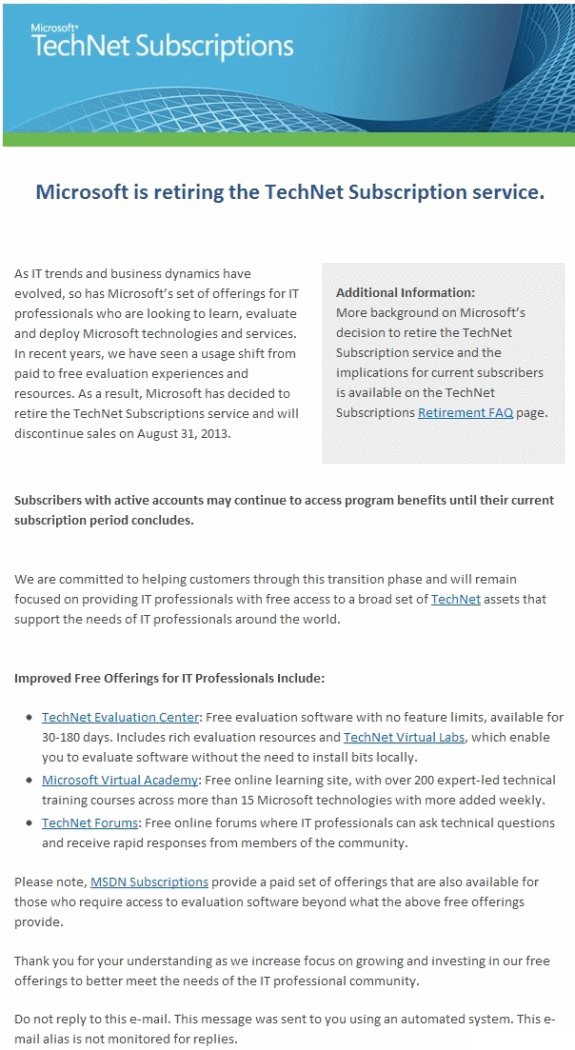