Intel announced the creation of a new cable design that can push a whopping 800Gbps! The cable features 64 fibers that can push 25Gbps apiece and it can do so at a distance of up to 300 meters.

The new cables are based on Intel's Silicon Photonics technology that pushes 25Gbps across each fiber. Last year, Intel demonstrated speeds of 100Gbps in each direction, using eight fibers. A new connector that goes by the name "MXC" holds up to 64 fibers (32 for transmitting and 32 for receiving), enabling a jump to 800Gbps in one direction and 800Gbps in the other, or an aggregate of "1.6Tbps" as Intel prefers to call it. (In case you're wondering, MXC is not an acronym for anything.)

That's a huge increase over the 10Gbps cables commonly used to connect switches and other equipment in data centers today. The fiber technology also maintains its maximum speed over much greater distances than copper, sending 800Gbps at lengths up to 300 meters, Intel photonics technology lab director Mario Paniccia told Ars. Eventually, the industry could boost the per-line rate from 25Gbps to 50Gbps, doubling the overall throughput without adding fibers, he said. 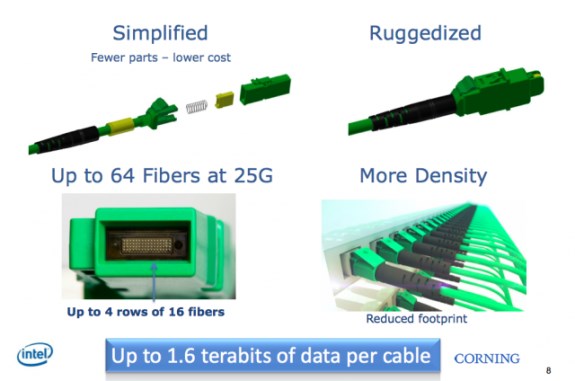