Posted on Tuesday, Mar 25 2014 @ 20:03 CET by Thomas De Maesschalck
NVIDIA announced that after the Tegra K1, the next member in the Tegra family will be Erista. This chip will be based on the upcoming Maxwell architecture, it will arrive in 2015 and promises 65 to 70 gigaflops of computing power.

Erista isn't coming until 2015, but it will be based on the company's Maxwell architecture, which is the technology powering its next-gen GPUs on the desktop. Right now, we have Tegra K1 right around the corner, which is based on the Kepler architecture, and has around 40 GFLOPS of performance, but Erista drives that up to around 65-70 GFLOPS. We should hopefully hear more on that as 2014 comes to a close. 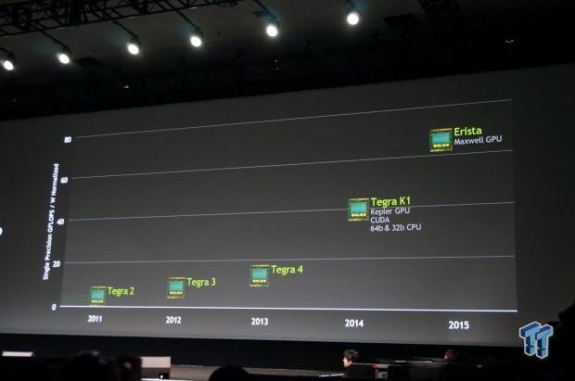