Posted on Thursday, Aug 14 2014 @ 10:50 CEST by Thomas De Maesschalck
Earlier this week Internet users in North America suffered from high latency and dropping Internet connections. The issue was caused by older backbone routers with ternary content addressable memory (TCAM) with support for a maximum of 512K (524,288) routes. As the border gateway protocol (BGP) tables outgrew the space allotted for them, the routers slowed down or simply shut down.

This week's issues aren't an isolated event, the problems are expected to get worse next week as more and more providers will cross the 512K line. Some tech firms have been warning about this for quite some time but now that issues are starting to pop up it's expected that providers will finally feel a sense of urgency to resolve this problem. A more technical explanation of the event can be read at Renesys.

The real test, when large providers commonly believe that the Internet contains 512K routes, and pass that along to all their customers as a consensus representation of Internet structure, will start later this week, and will be felt nearly everywhere by the end of next week.

Enterprises that rely on the Internet for delivery of service should pay close attention to the latency and reachability of the paths to customers in the coming weeks, in order to identify affected service providers upstream and work around them while they perform appropriate upgrades to their infrastructure. 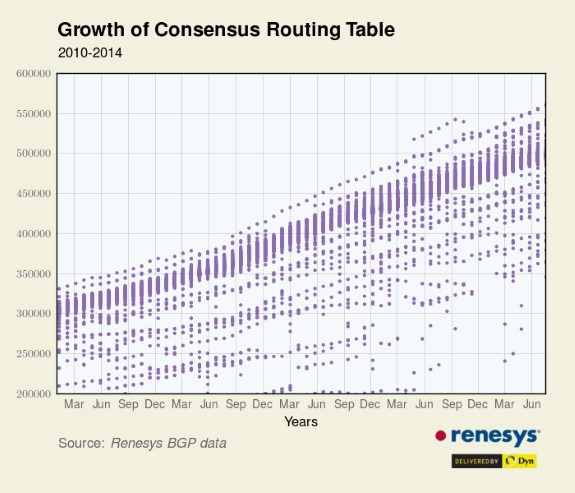