NVIDIA is rolling out new gaming bundles for its GeForce GTX 980 and GeForce GTX 970 cards. The new bundle includes Assassin’s Creed Syndicate and Rainbow Six Siege. We do not know the exact details but this likely applies to select cards from select vendors, it expires on 1/5/2016 or until supplies run out.

Both Ubisoft titles are sponsored by NVIDIA and will likely feature some exclusive NVIDIA technologies. Assassin’s Creed Syndicate will release on PC on November 19, 2015, while Tom Clancy’s Rainbow Six Siege on December 1, 2015. So far there’s no word of whether the offer will extend to other GeForce models, like the GTX 980 Ti and the GTX Titan X, but given that most of Ubisoft’s biggest titles were offered with the high-end NVIDIA GPUs in the past, the offer should extend to those as well. The soon to be announced Far Cry Primal, could serve as another potential bundled title for NVIDIA, but a release window was not detailed yet. 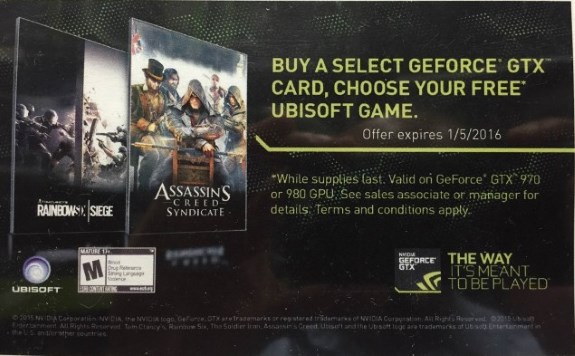