Posted on Thursday, Nov 26 2015 @ 13:59 CET by Thomas De Maesschalck
While the majority of gamers has 8GB or less of system memory, the server market will soon see the arrival of the first 128GB DDR4 modules! Samsung announced it's now mass producing world's first through silicon via (TSV) DDR4 server memory modules with a capacity of 128GB.

A single stick of 128GB DDR4 memory features a whopping 36 4GB DRAM packages, containing a total of 144 of 8Gb DDR4 memory chips made on a 20nm process and assembled with TSV packaging technology.

The module runs at 2400MHz and promises power savings of up to 50 percent versus the 64GB modules that were revealed in 2014. Samsung promises future versions of its TSV DRAM will hit 2667MHz and 3200MHz frequencies.

Samsung Electronics announced that it is mass producing the industry’s first “through silicon via” (TSV) double data rate-4 (DDR4) memory in 128-gigabyte (GB) modules, for enterprise servers and data centers.

“We are pleased that volume production of our high speed, low-power 128GB TSV DRAM module will enable our global IT customers and partners to launch a new generation of enterprise solutions with dramatically improved efficiency and scalability for their investment,” said Joo Sun Choi, executive vice president, Memory Sales and Marketing, Samsung Electronics. “We will continue to expand our technical cooperation with global leaders in servers, consumer electronics and emerging markets, where consumers can benefit from innovative technology that enhances their productivity and the overall user experience.”

Conventional chip packages interconnect die stacks using wire bonding, whereas in TSV packages, the chip dies are ground down to a few dozen micrometers, pierced with hundreds of fine holes and vertically connected by electrodes passing through the holes, allowing for a significant boost in signal transmission. In addition to capitalizing on the industry’s highest capacity and TSV’s advanced circuitry, Samsung’s 128GB TSV DDR4 module has a special design through which the master chip of each 4GB package embeds the data buffer function to optimize module performance and power consumption.

As a result, Samsung’s advanced 128GB TSV DDR4 RDIMM provides a low-power solution for next-generation servers with speeds at up to 2,400 megabits per second (Mbps), achieving nearly twice the performance, while cutting power usage by 50 percent, compared to using the previous highest capacity DRAM modules ? 64GB LRDIMMs, whose four-chip package stacks are hampered by power and speed limitations caused by their use of conventional wire bonding.

Samsung is responding to growing demand for ultra-high capacity DRAM by accelerating production of TSV technology in the market and quickly ramping up 20nm 8Gb DRAM chips to improve manufacturing productivity. In solidifying its technology leadership and expanding the market for premium memory solutions, the company plans to provide a complete lineup of its new high-performance TSV DRAM modules within the next several weeks including 128GB load reduced DIMMs (LRDIMMs).

In addition, Samsung will continue to maintain its technology leadership by introducing TSV DRAM with higher performance. These will include modules with data transfer speeds of up to 2,667Mbps and 3,200Mbps that help to meet intensifying enterprise server needs, while expanding TSV applications into high bandwidth memory (HBM) and consumer products. 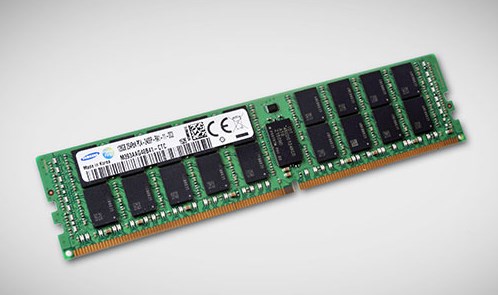