When news leaked about Intel's plan to release Coffee Lake later this year many wondered why the chip giant has a fourth-gen 14nm architecture on its roadmap despite 10nm arriving at roughly the same time.

Now we have a bit more details as German tech site PC Games Hardware reports that Intel revealed at its Technology Manufacturing Day that Coffee Lake (aka Kaby Lake Refresh) will use the 14++ process because the latest generation 14nm node delivers higher transistor performance than the first-generation 10nm node, while not requiring more power than the previous 14nm nodes. Intel claims this is because its 14++ process delivers a more than linear increase in performance versus previous iterations.

So there you have it, the low-power chips for ultrabooks like the Cannon Lake-U will be the first processors to make the switch to the 10nm process, because these chips benefit from the lower power consumption of the 10nm node.

The Coffee Lake processors on the other hand will use 14++ because for high-end desktop chips power efficiency comes secondary and this process enables higher performance than the first 10nm node. And as an added bonus for Intel, production on this node will likely be cheaper than 10nm production. Intel also confirmed it plans 10+ and 10++ revisions of its 10nm process. 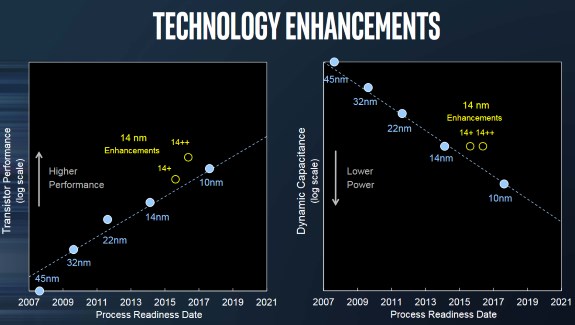