Posted on Tuesday, Jul 24 2018 @ 11:51 CEST by Thomas De Maesschalck
Toshiba Memory held a groundbreaking ceremony for its K1 memory fab in Kitakami, Iwate prefecture, in northeastern Japan. The fab is expected to be ready in the fall of 2019, it will focus on 3D flash memory production and promises to be the most advanced in the world. Toshiba Memory says it's in continued talks with WD to make this investment part of the joint-venture between the two firms.

Toshiba Memory Corporation, the world leader in memory solutions, today held a groundbreaking ceremony for the first semiconductor fabrication facility (fab), called K1, in Kitakami, Iwate prefecture, in northeastern Japan. On its completion in autumn 2019, the facility will be one of the most advanced manufacturing operations in the world, dedicated to production of 3D flash memory.

Toshiba Memory continues to advance technologies in flash memory. The company is now leading the way forward with advances in its BiCS FLASH™, its proprietary 3D flash memory.

Demand for 3D flash memory is increasing significantly on fast growing demand for enterprise servers, datacenters and smartphones. Toshiba memory expects continued strong growth in the mid and long term. The new facility will make a major contribution to business competitiveness in corporation with Yokkaichi operations.

The new facility will not only be the largest Toshiba Memory fab, but it will be the most advanced as well. It will be constructed with a seismic isolation structure that allows it to absorb earthquake tremors, and it will reduce environmental loads by deployment of the latest energy-saving manufacturing facilities. It will also introduce an advanced production system that uses artificial intelligence (AI) to boost productivity. Decisions on the new fab’s equipment investment, production capacity and production plan will reflect market trends.

Toshiba Memory expects to continue its joint venture investments in the new facility based on ongoing discussions with Western Digital Corporation.

Going forward, Toshiba Memory will continue to actively cultivate initiatives aimed at strengthening competitiveness, including timely capital investments and R&D in line with market trends. The company will also contribute to the development of the regional economy of Iwate prefecture, Japan. 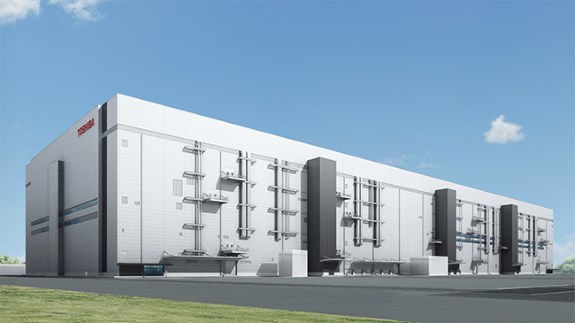