Smartphones have killed the camera market

Posted on Monday, Oct 01 2018 @ 10:50 CEST by Thomas De Maesschalck
A decade ago, the future looked bright for digital cameras, but in recent years shipments of these devices have fallen off a cliff. The reason is very simple. These days everyone has a smartphone in his pocket or purse, and these compact devices are increasingly capable of capturing high-quality photos.

Of course, your smartphone isn't as good as a dSLR with a decent lens, but the latter is pretty bulky and isn't nearly surgically attached to your hand. The result is that the camera market fell to 25 million units in 2017, down from a peak of 121 million units in 2010.

As cell phones are showing signs of improvement at catching pictures a seemingly endless amount of time, companies like Apple, Samsung. Huawei have taken the game up. Here we see cell phones openly rivaling the other cameras. And so digital cameras have totally disappeared from the scene. 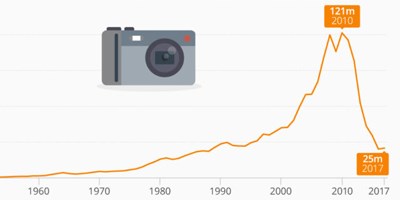