VideoCardz spotted a fresh leak that provides more information about upcoming F-series Comet Lake-S processors from Intel. The 10th Gen Core chips with F-suffix lack integrated graphics. Basically, this series is used to sell the processors with defective graphics, the silicon is the same as the regular parts.

There are pros and cons to the F series. The 9th Gen Core F series are on average $25 cheaper than non-F (with iGPU), Overclock3D reports after the most recent price cut. According to other reports, the KF variant might be more binned SKU than the non-F, but generally, there is not much of a difference between the two.

The downside, however, is that your CPU will always require dedicated graphics (which may increase power consumption). You also lose QuickSync support and discrete graphics card troubleshooting may become a problem.

You can view the specifications below. The Comet Lake-S lineup is expected to be introduced next month. 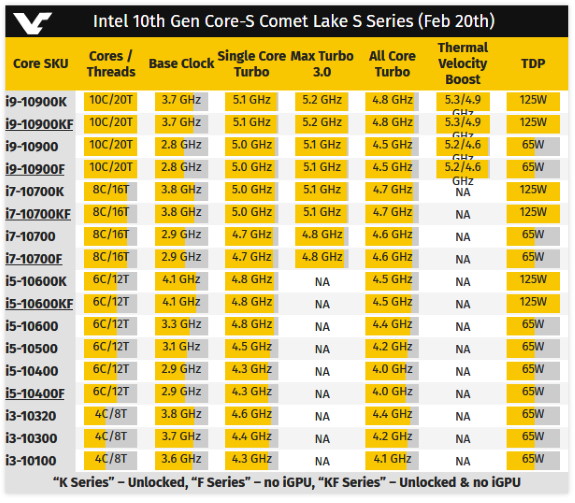