LED fans, you have them in all colors of the rainbow, and I'm sure almost everyone of you has already seen one or more. Especially if you're a frequent visitor of hardware and casemodding websites. One of the things I really like about LED fans is the fact that the LEDs add something to the fans (the cool light effects) without bringing in any disadvantages. A lot of company's are retailling LED fans and Antec is one of them. Today we'll be having a closer look on the Trilight LED 80mm Fan from Antec. These are the only legal LED fans on the market of this type because Antec has a patent on them. (more about this issue at the end of the review)


The Trilight fan I got didn't have a retail package but I'm sure that they will have one when you buy them in a shop or directly from their website. Most LED fans have three or four LEDs that have the same color (blue, red, and green are the most popular ones but you even have white, yellow, and purple LED fans). Besides those you also have LED fans with 2 colors mostly red and blue. The Antec Trilight LED fan however combines the best from both worlds and has three LEDs, a blue , green and a red one!

Overall these specifications are like most other LED fans. They aren't super high performance 80mm fans which push out 70CFM or more and produce a LOT of noise. But the Antec LED fans have an average airflow and the noise production is also average. Compared to most other LED fans they have a good noise/airflow ratio.


Also included with the fan was a bag with four case screws. Nice that they thought about it!


Testing
Now I'm going to do some testing to see if this baby is really able to cool down my system. I first took out my two intake and outtake fans. I let my system running for a while like that and the heat raised quite a bit. The only running fans were the ones in my PSU, my CPU cooler, and my 3D Card cooler. I wrote down all temperatures I could gather and let the Antec LED fan run for 15 minutes as an outtake fan (close to my CPU and GPU) and compared the difference. The room temperature was about 19°C. One of the things that I noticed when I plugged in the fan was the increased amount of noise that my PC generated. I've also monitored the RPM of the fan it was running slightly higher than the specs on the site of Antec told me, it was running between 2720 and 2830RPM 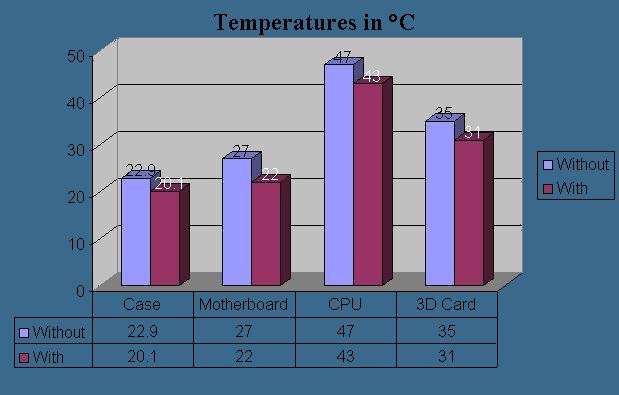 
From my test results I can conclude that it has a good performance, but does it looks well? Because that's also an important reason to buy a LED fan, the looks. I think this fan looks very good, I've taken a few photos so you can see how cool it looks :-) The light effects are cool, even in daylight.


Conclusion
Antec is known for their high-quality products and this is surely one of them! It doesn't only looks cool, but it also makes your PC cooler! Overall I like these fans, they aren't priced too high, only a little bit higher than most normal 80mm fans. The only thing that could stop someone from buying one of them is that the noise that these fans produce is a little bit too much to put in a really quiet computer.
Price is $9.95 at the Antec Store (for US and Canada), take a look here if you live in another country.

The Bad Stuff
- Rather noisy


UPDATE : David from Antec mailed me an interesting piece of text about the LED Fans from Antec :
"Antec invented the LED Fan (the type with the LEDs in the shroud pointed in at the fan blades). We hold the patent on that style of LED Fan, regardless of the number of LEDs (3, 4, 12, it doesn't matter). There are a number of illegal pirates on the market, but the only other legal LED Fan I'm aware of is the one with the two LEDs in the hub, pointing out of the fan. It doesn't seem to be a very popular design."
A Press Release about this issue can be found here. I honestly didn't know this and I would like to thank Antec for pointing this out. A lot of companies seem to be violating this patent though..

Comment #1 posted by Anonymous on 2006-05-28 09:58:29
It goes to show what a low and pityful world this is, if you have to patent LEDs in a fan, serving no other purpose than inducing wet dreams in geeks who really ought to know better. If something worthwhile had been patented, perhaps, maybe, people would have a case, but this is going way beyond ridiculous.

Comment #2 posted by Anonymous on 2003-05-04 12:04:17
I got 4 of the blue LED fans from antec in my PC and i love them! I recently got into Xbox modding, and i decided to put in some led fans and a choose antec, i was debating wither to get just the green led fand or the trilite, after reading this article i was pleased that i choose the trilite but the only down side is that it was a lil bit noisy but not that bad, and it mad my Xbox alot cooler. Btw i am running Linux on my Xbox b/c Linux ownes M$.