This game begins in 2012 when an alien race called the Hierarchy lands on Earth to strip-mine our planet.

Key amongst Universe at War: Earth Assault innovations is "Tactical Dynamics", a system that allows players to retrain and customise their units on the real time battle field. During the immense battles, Tactical Dynamics will allow your faction to overwhelm enemy forces and exploit tactical situations. Weaponry and defences can be modified in true real-time to take advantage of the constantly shifting battlefield while fully customisable tech trees will allow players to constantly amend the development of technologies that they deem key to victory. 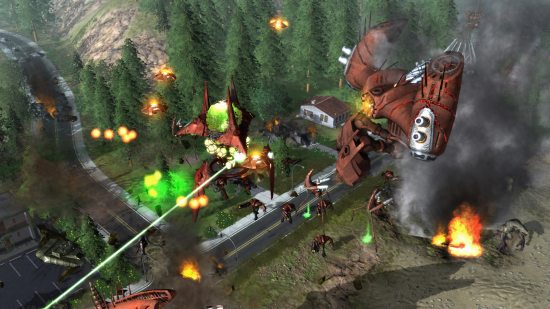 One of the interesting features of Universe at War is that the terrains will be deformable. More info and screenshots at Voodoo Extreme. A release date hasn't been made available yet.