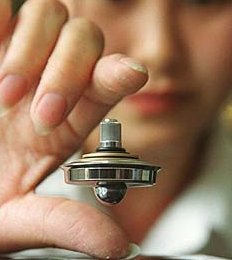 A team of physicists that already proved that invisibility cloaks are feasible report they've also solved the mystery of levitation:

Professor Ulf Leonhardt and Dr Thomas Philbin, from the University of St Andrews in Scotland, have worked out a way of reversing this phenomenon, known as the Casimir force, so that it repels instead of attracts.

Their discovery could ultimately lead to frictionless micro-machines with moving parts that levitate But they say that, in principle at least, the same effect could be used to levitate bigger objects too, even a person.

The Casimir force is a consequence of quantum mechanics, the theory that describes the world of atoms and subatomic particles that is not only the most successful theory of physics but also the most baffling.

The force is due to neither electrical charge or gravity, for example, but the fluctuations in all-pervasive energy fields in the intervening empty space between the objects and is one reason atoms stick together, also explaining a “dry glue” effect that enables a gecko to walk across a ceiling.

Now, using a special lens of a kind that has already been built, Prof Ulf Leonhardt and Dr Thomas Philbin report in the New Journal of Physics they can engineer the Casimir force to repel, rather than attract.

Because the Casimir force causes problems for nanotechnologists, who are trying to build electrical circuits and tiny mechanical devices on silicon chips, among other things, the team believes the feat could initially be used to stop tiny objects from sticking to each other.