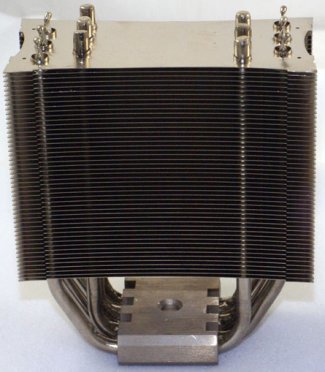 AnandTech has tested one of Thermalright's new coolers, the Ultima-90. This cooler features a similar design as other Thermalright heatpipe towers but is a bit smaller.

The cooler looks like an Ultra-120 eXtreme that has been on a diet. There are the same six heatpipe loops (12 risers) seen in the eXtreme, but the Ultima-90 body is closer in size to the Ultra-90. The Ultra-90 is 102x45x147, where the Ultima-90 is 115x55x139. That makes the Ultima-90 a little wider and deeper than the Ultra-90, but about 8mm shorter than the Ultra. It is smaller in all dimensions than the top-performing Ultra-120 eXtreme which is 132x63.44x160. Keep in mind that the eXtreme is already one of the smallest of the full heatpipe tower coolers and you will get a good idea of how small the Ultima-90 is relative to other heatpipe towers we have reviewed.

Check it out over here. Overall the Thermalright Ultima-90 proved to be a very good processor cooler, but obviously not as good as the bigger and heavier Thermalright Ultra-120 eXtreme which costs only $15 more.