Posted on Thursday, Jan 17 2008 @ 00:40 CET by Thomas De Maesschalck
AnandTech published an article about the MacBook Air to clarify the situation regarding this notebook's processor. The site says the MacBook Air uses a special 65nm processor from Intel:

It looks like Intel created Merom SFF specifically for the MacBook Air, a product that wasn’t in Intel’s lineup or roadmap but one that Apple needed. Remember that the first chip that will look like this wasn’t scheduled to be out for another six months with Montevina SFF.

It’s not clear whether Intel will make this custom Merom available to other OEMs (we’d suspect they would if there was enough demand), but it’s a tremendous feat on Apple’s part. This isn’t the first time Intel has put together a one-off chip for Apple; if you’ll remember, the CPU in the Apple TV was a special Dothan that wasn’t a part of Intel’s standard lineup.

We’ll have a look at the MacBook Air as soon as they start shipping, if you’re ordering one now we’d recommend taking the SSD option if you can afford it. At $999 it’s pricey, but it should help keep heat down in the chassis and performance should be better than the pitiful 1.8” HDD in the system, which we suspect will end up being its weak point.

We also can’t help but think that a Penryn based MacBook Air would be far more desirable thanks to lower thermal output of Intel’s 45nm chips. If you are fine waiting, a MacBook Air in the second half of 2008 will give you slightly better performance, better battery life and should keep your lap a lot cooler. 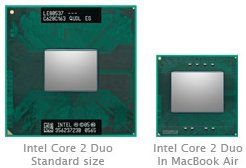